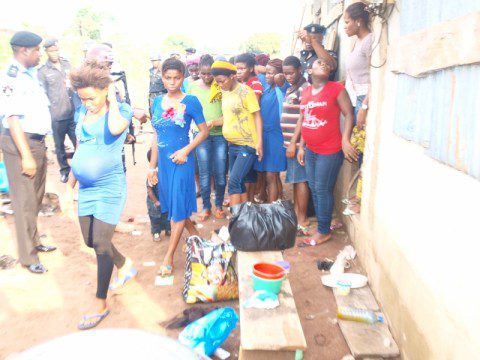 Operatives from Abakpa and Ezeagu divisions of the Nigeria Police Force,NPF, has smashed a notorious gang who allegedly specializes in stealing and selling babies to prospective buyers at exorbitant sums.

The Police gave the names of the 3-member gang to include;Leader, Ezechi Esther Ijeoma, she hails from Akabo village in Ikeduru Imo state, residing in Aforoghe, Ezeagu Enugu,Okafor Beatrice, Awha-Imezi in Ezeagu Enugu state and Odenigbo Theresa, from Oyofo, Ezeagu.

The suspects were nabbed over their alleged involvement in trafficking and selling of a 5-year-old Success Godwin, whom Esther Ijeoma allegedly stole from yet-to-be identified owner at Egbeda,Lagos State on 13th March in alleged connivance with  a yet-to-be identified member of the syndicate which was scheduled to be sold at the rate of five hundred thousand naira to a prospective buyer yet-to-be nabbed.

Police Public Relations Officer,PPRO, of the command, Mr. Ebere Amaraizu, confirmed the incident in a press release made available to newsmen in Enugu at the weekend.

The Spokesman said, ?Okechukwu Michael, allegedly stolen from Ichieahamba village Umuikea in Abia state on 5th March was recovered from of the syndicate member,Beatrice Okafor.

?She pegged the selling price of Okechukwu Micheal at Six Hundred thousand naira.

?The two recovered boys are hale and hearty and the suspects are responding positively in Police investigations. Once we are through with the investigations, they will be prosecuted according to the law?.