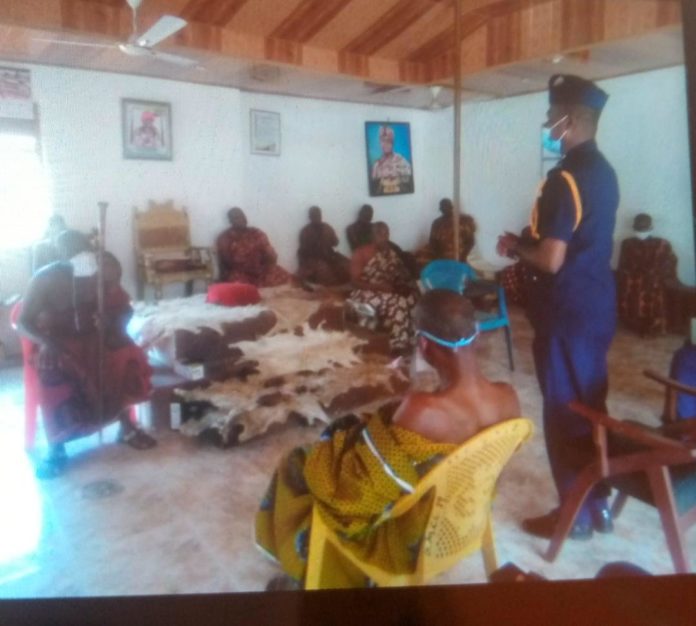 He said his office would not tolerate interventions from chiefs, politicians and opinion leaders on the arrest of any criminal or suspect.

ACP Boampong gave the caution when he paid a courtesy on Ogidigram Okobioko Asiedu Kobena Botwe II, Swedruhene to officially introduce himself as the new Swedru Divisional Police Commander in the Agona West Municipality.

He said the Police were determined to deal with narcotics dealers and criminals around Swedru township.

He said the police would arrest and prosecute drug barons, who import narcotics to Swedru and the surrounding communities to reduce criminal activities.

He said it would ensure a total reduction of crime and other vices, which militate against the development of Swedru.

The Divisional Commander tasked the paramountcy and the divisional Chiefs to advise politicians to be circumspect in their utterances during, before and after the December 7, 2020 elections.

ACP Boampong said the Police Administration would deal with political party members, who would misconduct themselves during the electioneering campaign to ensure peace.

He further assured the paramount chief that police personnel would intensify day and night patrols around the town to arrest miscreants, who were breaking into shops and stores at Swedru.

On his part, the Swedruhene expressed concern about the alleged bad behaviour of some police personnel, who have connived with narcotic dealers to smuggle wee into Swedru town.

He appealed to the new Divisional Commander to clamp down on ‘wee ghettoes’ which were seriously affecting the lives of the youth in the area.

The Swedruhene asked ACP Boampong to deploy more police officers to intensify patrols in the communities around Swedru as reports indicated that there were rampant break-ins into shops and stores.

Nana Botwe also asked the ACP Boampong to collaborate with Officials of the Ghana Immigration Service(GIS) to help remove foreigners engaged in illicit trading activities in the Area.