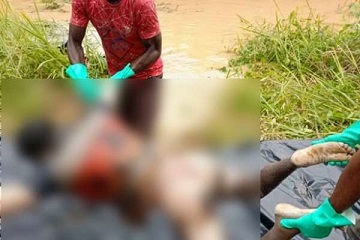 Search is continuing to retrieve the bodies of three other victims who were among passengers whose canoe capsized in the Offin River at New Achiase in the Atwima-Mponue District of the Ashanti Region on Friday, October 8, 2021.

Two of the victims whose bodies were retrieved in a decomposing state on Sunday have been buried by the police and environmental health officers upon the advice of the District Coroner.

Deputy Superintendent of Police (DSP) Mr Jerry Amekah, the Atwima Mponua District Police Commander, told the Ghana News Agency at Nyinahin that the search party was still combing the banks of the river to retrieve the bodies of the other victims.

Police investigations are also underway to ascertain the cause of the disaster.

DSP Amekah said relatives of the victims whose bodies were retrieved identified them as Isaac Kattey, 25, and one identified only as Holy, 23 years.

He said due to the decomposing state of the bodies the police, in consultation with the district security committee, environmental health officers, and on the advice of the District Coroner buried the bodies to avoid any epidemic.

The use of canoe is the only source of transportation for the people of New Achiase and other surrounding farming communities to cross the River Offin to their farms and back home.

According to some of the residents who spoke to the Ghana News Agency this is not the first time such a disaster had occurred in the area.

They said the river often overflowed its banks after torrential rains and that had resulted in the canoe capsizing.