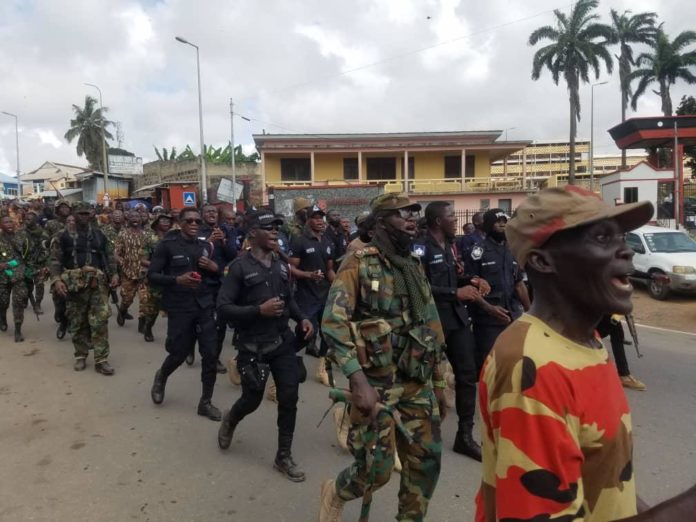 The Central Regional Police Command together with its sister security agencies on have embarked on a confidence boosting march through the principal streets of Cape Coast.

The exercise, which lasted for over three hours saw officers of the Police, Military, Immigration Service, the Ghana National Fire Service and the Prison Service participating.

Police resources such as ambulances, and amoured vehicles among others were displayed to re-assure the public that the Police was well equipped for the task ahead.

The exercise started from the Regional Police Headquarters, through Pedu to Abura, Kotokuraba Nstin and other communities identified as election hotspots in the Cape Coast Metropolis.

The exercise, was aimed at assuring the public of the preparedness of the security agencies to maintain law and order before, during, and after the December 2020 polls.

Addressing the media, the Regional Commander, DCOP Habiba Akyere Twumasi-Sarpong said the Police and the other security agencies were ready to ensure peace before , during and after election 2020.

“We are professionals and we will continue to be neutral. We have the forces and will be policing the elections together”, she said while stressing on the need for effective cooperation among the security agencies to successfully execute the task ahead.

DCOP Twumasi-Sarpong assured Ghanaians especially the people of the Region of maximum protection and thus admonished them to reduce their fear of crime.

She however, advised the youth not to allow themselves to be used for crime during the political season.

“If anybody commits crime in the name of politics, politics will not be considered at all and the person would be prosecuted according to the law”, she stated.

She further encouraged Ghanaians, especially the youth to be law abiding and support the Police and other security agencies by volunteering information that would help the Police be ahead to unravel crimes.