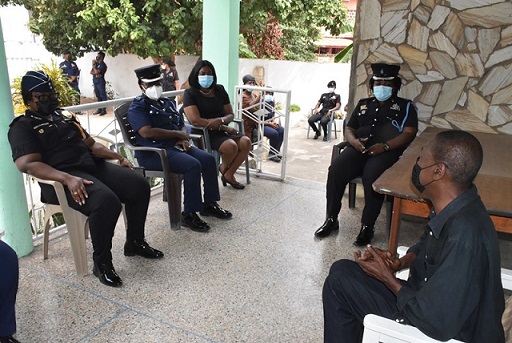 A high powered Police delegation on Tuesday called on the family of Policewoman One (PW/1) Rosamond Asiamah Nkansah to mourn with them after her demise on February 22, 2021, at Caprice, her residence.

Made up of the Police Ladies’ Association (POLAS) and the Police Administration, the team was led by Commissioner of Police (COP) Maame Yaa Tiwaah Addo-Danquah, the Director General, Welfare of the Ghana Police Service (GPS).

She assured the family GPS’ solid support” in these difficult moment as they mourned their beloved, Madam Nkansah.

“We share in your loss and would support the family to ensure the late Madam Nkansah is given a befitting burial.”

Through Madam Nkansah, countless women are in the Service and can still make their families contrary to the Gold Coast Police Force regulations.

Mr Yeboah, spokesperson for Madam Nkansah’s family, was grateful for the gesture, saying the funeral rites arrangements would be communicated to the Service at the right time.

She attended Wesley Girls High School in Cape Coast and was awarded a Teacher’s Certificate ‘A’ and other certificates.

PW/1 Nkansah was enlisted into the Gold Coast Police Force on September 1 1952 at age 22.

At that time, Policewomen were not allowed to marry or get pregnant.

Five years and nine months into the Force, PW/1 Rosamond Asiamah decided to marry so she resigned but would stand up for her principles among which were equality and equity.

She thought that women in the Police service were not being fairly treated as their male counterparts were allowed to marry and bear children.

Before her resignation on May 16, 1958, PW/1 Rosamond Asiamah petitioned the Police Administration and the discrimination clause was removed; thus allowing women in the service to marry and bear children and causing those who had resigned to start families to be reinstated.

After resignation, she taught at St. John’s Grammar School from 1961 to 1964 as a professional teacher.

Madam Nkansah retired from active service in 1999 to focus on writing of books. She also translated words in her book (Octagon) into foreign and local languages.