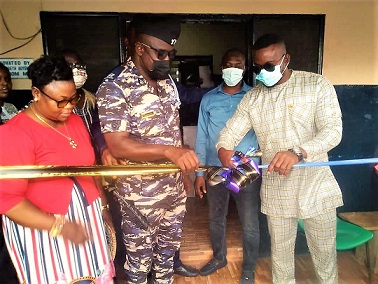 The Police Administration has been advised to initiate moves in ensuring that suspects undergo mandatory COVID-19 testing before they are put in custody.

Mr. Kwadwo Bamba, a youth activist committed to Ghana’s sustainable development, said the measure had become imperative to reduce the vulnerability of suspects in contracting the disease due to the congestion at the police cells.

Additionally, the Police ought to be supported with the requisite items such as face masks, sanitizers, and hand-washing bowls to protect themselves as well as those visiting the police station, he advocated.

Mr. Bamba, a philanthropist and also member of the Ashanti Regional Youth Wing of the New Patriotic Party (NPP), made the call in an interview with the Ghana News Agency (GNA), Kumasi.

This was after he had handed over a renovated Police counter at the KNUST Police Station, a project sponsored by him to boost the work of the personnel.

Aside from the renovation, the youth activist also provided the Station with a new metal gate.

Mr. Bamba hinted that he embarked on the project in a response to an appeal by the Station Command, saying, the citizenry should partner with the Police in combating crime in the country.

“The enforcement of law and order is a shared responsibility,” he noted, urging Ghanaians to “see the Police as a friend and not an enemy.”

He asked the youth to always pursue productive ventures for the nation’s development and growth.