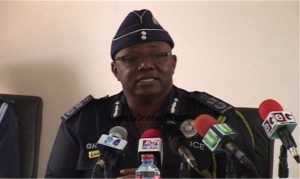 Mr. Mohammed Ahmed Alhasan, the Inspector General of Police (IGP) has urged Police personnel to eschew acts and practices that could tarnish the reputation of the Police Service.

He said the Police were performing creditably in the fight against crime but there are a few among them, whose conducts were corrupting their good works and needed to assess themselves to build confidence in the civilian population.

In an interview with the Ghana News Agency on Tuesday, in Sunyani, Assistant Superintendent of Police (ASP) Mr. Christopher Tawiah said the IGP gave the advice when addressing over 500 Police Officers at Techiman, as part of his one day working visit to the Brong-Ahafo Region.

Mr. Alhassan condemned extortion by some of the personnel, saying that, collecting of money before granting bail to suspects and issuing of medical forms to complainants were not right.

According to ASP Tawiah, the IGP entreated the personnel of the Police Service to avoid extortion on the roads, abuse of suspects, indiscriminate opening of fire and unnecessary arrests.

Deputy Commissioner of Police (DCOP) Maxwell Sakispago Atingani, commended the Police in the Region for their efforts in minimize crime by 73 per cent in 2014, adding that, they hope to reduce it by 80 per cent this year.