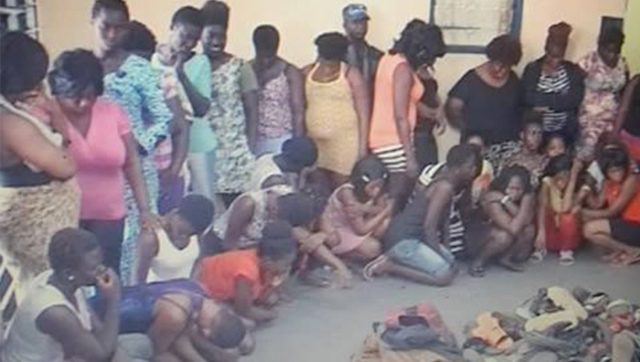 The Nungua Divisional Police Command in the Greater Accra Region has arrested about 33 sus­pected prostitutes, together with 42 of their male counterparts and clients, in some brothels at Nungua, suburb of Accra.
The suspects currently in police custody, according to police reports, were seen in action when the broth­els were raided in a joint swoop organised by the divisional com­mand and the district command from 10:30 pm to 4:00 am yesterday.

Others were also spotted on tables in a nearby market openly having sex with their partners.

Three operators of the brothels raided were also apprehended by the police.

They are Francis Atiapa, Daniel Atiapa and Richard Atiapa.
Divisional Police Command­er, ACP Victor Gyan Kyereko, who confirmed the arrest to Daily Guide, said the police received several complainants about the activities of the commercial sex workers and how some unscrupu­lous criminals gathered there to plan their robbery activities in the area.

Some of the suspected prostitutes with their counterparts were caught in the act while others waited for their turns to operate.

The brothels visited were located at Chris Berry Night Club and Abrafi Spot areas and some parts of Sakumono.

The suspected prostitutes, according to the commander, were between the ages of 13 and 32 years.

According to ACP Kyereko, ?most of the suspected prosti­tutes were from Somanya in the East­ern Region, Kasoa in the Central Region and Agbogloshie in Accra, but travel to Nungua every evening to practise prostitution.?

Items found in the brothels after the raid included a number of folded toilet rolls, boxes of condoms, jackets and an unspecified amount of money.

ACP Gyan Kyereko explained that the ladies were kept inside the brothels by the operators while the men (clients) enter to pay their monies to them (operators), col­lect their condoms and toilet rolls and enter the chambers to have sex with them.

The suspects will be sent to court for prosecution when investigations are over.