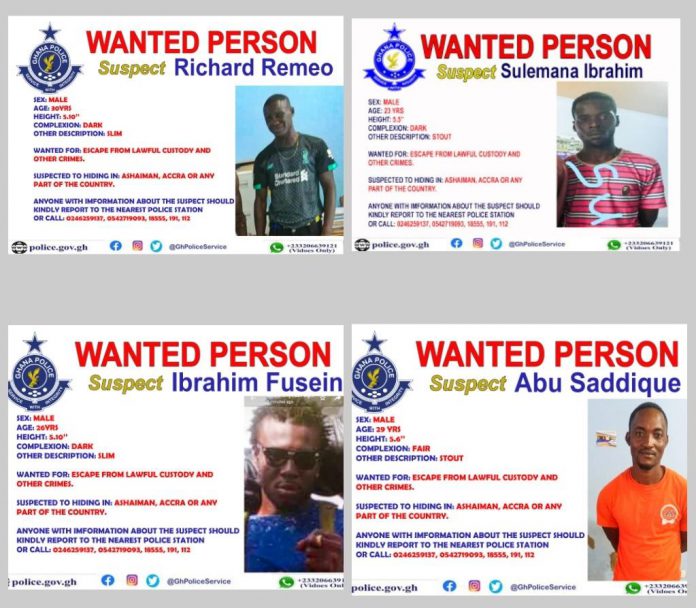 Seven out of 12 suspects who were in the custody of the Zenu-Atadeka District Police but escaped have been re-arrested, while five others are still on the run.

Six of them have since been convicted by the Ashaiman Circuit Court on their own pleas, on charges related to their escape from lawful custody.

This was contained in a statement signed by Chief Inspector Stella Dede Dzakpasu, Acting Public Relations Officer of the Tema Regional Police Command, and copied to the Ghana News Agency at Tema on Saturday.

The statement said, the Regional Command was making all efforts to re-arrest the five suspects who broke out of their custody.

The Police said, “Three out of the six who have been convicted were picked up from a hideout at Kubekrom No. 2 on the same day of escape, while the remaining three were picked up from Juapong in the Volta Region on April 6, 2021 with support of information from the public.”

According to the statement, the seventh person, Sumaila Karim, aged 21, surrendered to the police on April 8, 2021 and would also be arraigned.

Narrating events that led to their escape from custody, the police said, at 0640 hours on April 4, 2021, a police officer on duty was about to place suspect Aziz Fuseini, who had been arrested on bench warrant into cell.

“When the police officer open the cell gate, and about to place the suspect in it, the said suspect Aziz Fuseini who already had porridge in polythene with him as his breakfast, poured the hot porridge in the face of the Police officer making way for him and the 11 suspects already in detention to escape” it explained further.

The Tema Regional Police Command, therefore, called on the general public and any person with credible information leading to the arrest of any of the escaped prisoners to report to the nearest police station.