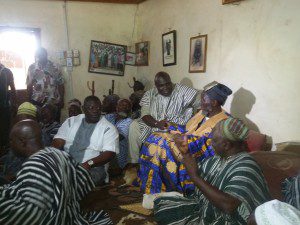 The Northern Regional Police Command has appealed to kingmakers in the Region to follow the right processes to select the rightful heirs to thrones and skins to halt the numerous chieftaincy-related violence being recorded. Deputy Commissioner of Police (DCOP) Ken Yeboah, the Northern Regional Police Commander, who made the appeal, said the ceaseless chieftaincy disputes in the area were taking a toll on the operations of the Police Command as it had to deploy personnel to conflict areas to maintain law and order.

He was speaking at a ceremony in Tamale to mark the 2014 West Africa Security Services Association (WASSA) celebration for police personnel in the region, at the weekend.

DCOP Yeboah said as a result of chieftaincy and land disputes, personnel were deployed to places like Gambaga, Bunkpurugu, Nakpanduri, Yendi, Bimbilla, Walewale, among other areas, adding: ?Such deployment of personnel is not only a drain on financial resources of especially the district assemblies but drives away investors.?

He asked the chiefs in the Region to ponder over the huge amount of resources spent on peace keeping in there in relation to their (chiefs) calls for development, emphasising, ?Let us remember to use dialogue to solve some of our misunderstandings rather than resorting to violence.?

He said, ?Chiefs must use the legal process to solve their misunderstandings and remember that when they expect their subjects to respect their rulings, they must also respect the rulings of the courts.?

Assault, stealing, and threatening, formed the bulk of cases reported.

He complained about the rising trend of youth indiscipline, saying, ?People in leadership who are perceived to be providing financial and political support to such lawless persons must remember that when you breed monsters, one day they will attack and devour you when they go hungry.?

He said, ?There is a need for more police stations to be opened for our presence to be felt in the communities, in addition to the formation of watch committees in the neighbourhoods as a means of complementing the work of the police.?