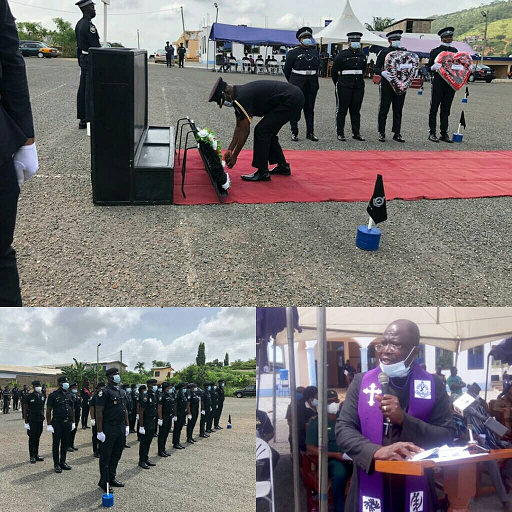 Assistant Superintendent of Police (ASP), Reverend Francis Amenuvor, has asked personnel of the Ghana Police Service to commit themselves wholly to God and trust in him.

He said God was capable of protecting all persons to succeed and triumph over difficulties in life, and it was therefore necessary that they surrendered themselves to him, while discharging their duties.

ASP Rev Amenuvor, who was giving an exhortation at a Police Memorial Day Observance Service organised by the Volta Regional Police Command in honour of personnel of the Service, who fell in line of duty, admonished them to carry out their duty with integrity and faithfulness.

He said the fallen personnel served the nation with integrity and faithfulness, consoling the bereaved families to have hope as Christ Jesus was the Resurrection and the Life, and “anyone who believed in him shall not perish but have everlasting life.”

The event has a parade of 24 officers, armed party, and wreath party and in attendance with the Regional Police Band.

Deputy Commissioner of Police (DCOP), Mr Edward Oduro-Kwarteng, Volta Regional Police Commander laid a wreath on behalf of the Ghana Police, Mr Proper Pi-Bansah, Ho Municipal Chief Executive, laid one on behalf of the government and the people of Ghana.

The fallen personnel, who hailed from the region and died in line of duty were Inspector Emmanuel Tsikudo and Corporal Frank Klu.