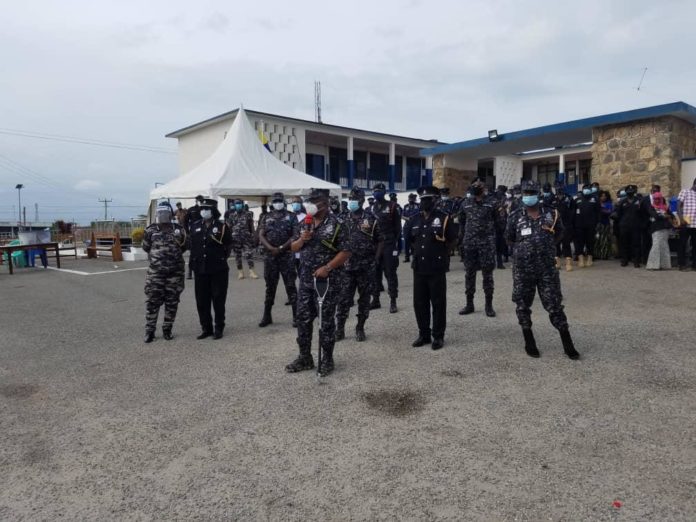 The Inspector-General of Police, Mr James Oppong-Boanuh on Thursday paid a working visit to the Central Regional Police Command to assess their operational readiness ahead of the December 7 general elections.

To show their readiness, personnel of the Regional command undertook a simulation exercise on how they would address a situation of violence at the collation centre, a polling centre and when EC officials were attacked and held hostage.

Mr Oppong-Boanuh assured the officers that anything that would mitigate against their excellent performance in the elections would be addressed.

He noted that though the Police were fully prepared to deal with whatever situation that may arise before, during and after the elections, issues relating to officers’ welfare, logistics and equipment could undermine their effective operations.

“We can assure the people of Ghana that we are going to protect the ballot on that day and ensure that whoever qualifies to vote, voted and whoever commits any offence will be brought to book”.

He commended the media in the region for their cooperation and admonished them to continue to help the police to achieve its aim of ensuring peaceful elections by educating the public on what they should and not to do before, during and after the December polls.

The IGP earlier paid a courtesy call on the Central Regional Minister, Mr Kwamena Duncan and the Omanhen of Oguaa Traditional Area, Osabarima Kwesi Atta II and later held a meeting with Regional and District commanders.

Mr Kwamena Duncan was confident that the Police would rise to the occasion to ensure violence-free elections having supervised seven general elections excellently.