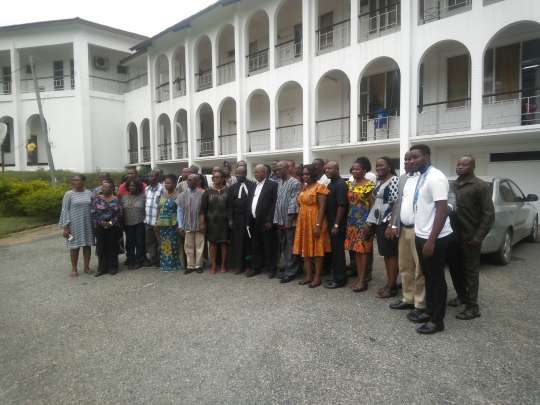 The Inter-Party Dialogue Committee, a unifying body that seeks to promote peace and resolve conflicts before, during and after general elections has been inaugurated in the Central Region with a call on political parties to desist from announcing election results.

Mr. Samue Asarel Akuamoah, Deputy Chairperson, Operations of the NCCE said it was the sole prerogative of the Electoral Commission ( EC ) to announce election results and no political party should assume that role.

“EC is the sole referee and its only the EC that can blow the whistle and declare the final results”, he cautioned and admonished political parties to peer review each other and name and shame all whose actions and inaction may result in election violation practices.

The IPDC would provide an effective platform for key stakeholders like the National Peace Council , the NCCE among others to engage with political parties in achieving a free, fair and peaceful election in 2020.

Mr Akuamoah pleaded with the Committee to use it’s available mediums to engage in Civic Voter education and to make the public understand the preamble of the Constitution on their electoral rights.

Mr. Nicholas Boateng, the Central Regional Director of the NCCE said key indicators of any successful democratic dispensation was credible election adding that, disruptive elections had brought untold hardship, violence and distraction to many developing countries in Africa.

” Ghana has not experienced this, yet, there are pockets of conflicts in our election throughout the fourth republic, hence this Committee stands to ensure political parties behave in a manner that is expected of them and educate the electorates on the importance of peace,” he stated.

Dr. Kenneth Aikins, the Chairman of the IPDC noted that, for sustainable development, cooperation from all stakeholders was needed.

He urged members of the IPDC to have a united front to marshal out plans on what and how such plans could be dully executed.

” let’s all be open-minded and objective and forger ahead in achieving a peaceful election 2020, he added.