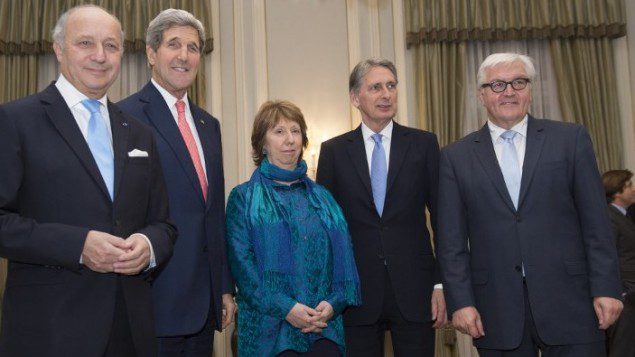 Amid political tension in the United States over potential new measures against Iran, leading European diplomats have made the case against new sanctions, arguing that ongoing negotiations over Tehran?s nuclear program should be allowed to bear fruit.

?First, it has stopped the progress of the most sensitive elements of Iran?s nuclear program,? they wrote, contending that Tehran had ceased production of its highly enriched uranium, stopped installing new centrifuges, and held up progress on the nuclear reactor at the Arak site.

?At the same time,? they continued, ?the international community has gained improved access to Iran?s nuclear facilities, allowing the world to verify whether Iran is living up to its commitments. Whereas previous inspections only occurred once every few weeks, the International Atomic Energy Agency is now able to conduct daily inspections of the Natanz and Fordow facilities, and the Arak reactor is now subject to monthly inspections.?

The ministers added that the interim agreement had given them ?time and space to try to negotiate a long-term settlement to the Iranian nuclear issue.?

After making clear that their objective was a comprehensive solution that recognizes Iran?s right to peaceful nuclear energy while verifying it does not achieve a weapon, the diplomats turned to the question of sanctions.

?Maintaining pressure on Iran through our existing sanctions is essential. But introducing new hurdles at this critical stage of the negotiations, including through additional nuclear-related sanctions legislation on Iran, would jeopardize our efforts at a critical juncture,? they wrote. ?New sanctions at this moment might also fracture the international coalition that has made sanctions so effective so far. Rather than strengthening our negotiating position, new sanctions legislation at this point would set us back.?

The authors promised that if Iran does not come to an agreement, or violates its commitments, ?we will have no choice but to further increase pressure on it.?

Washington and other global powers resumed talks with Iran last weekend in Geneva, with a view to having a framework deal in place by March.

The complex agreement would see Iran rein in its nuclear program, which the West believes is aimed at developing a bomb but which Tehran insists is purely for civilian use.

Israel, along with many members of Congress, has been arguing that new sanctions on Iran would push the country toward a negotiated solution.

Robert Menendez, the New Jersey senator who is the top Democrat on the Senate Foreign Relations Committee, has chafed for over a year at the Obama administration?s pushback against efforts he is leading with Sen. Mark Kirk (a Republican from Illinois) to pass sanctions that would go into effect should Iran walk away from talks with major powers over its nuclear capabilities.

The Senate Democrats, in the leadership last year, managed to quash the Menendez-Kirk initiative. But now that the Republicans are in the Senate majority, it?s back on, and Menendez says he?s ready to push ahead. The Kirk-Menendez bill, although it has yet to formally appear, is strongly backed by the American Israel Public Affairs Committee.

President Barack Obama, in one of his two most important foreign policy pronouncements in the State of the Union speech Tuesday, said he would veto new sanctions.

Prime Minister Benjamin Netanyahu has also pushed for new sanctions on Iran. He confirmed Thursday that he would address both houses of Congress in March at the invitation of Republican House Leader John Boehner, which was not warmly received by the White House. Obama?s allies fear the trip could be used by Israel and by Republicans to rally opposition to a nuclear deal, undercutting years of sensitive negotiations.

Israel?s Mossad intelligence agency denied on Thursday reports that it had warned US senators against new Iran sanctions. A report saying that the head of the spy agency opposed new sanctions was carried by Bloomberg on Wednesday.