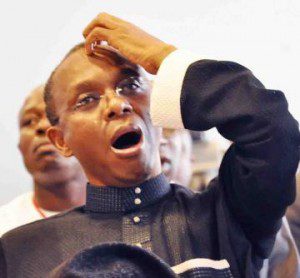 Terrorism is the greatest threat to international peace and security in today?s world. The world acknowledges it as such and has accordingly invested heavily in the global fight against terrorism which within the last two decades is evident in the Iraq and Afghanistan wars and the ongoing global counter-terrorism efforts.  Just yesterday the British Prime Minister  David Cameron  raised the terror alert level in the United Kingdom in response to  the heightened risk of terrorist attacks particularly because of a high number of British nationals implicated in ISIS terrorist campaigns in Syria and Iraq. In none of these countries where strident efforts are made to defeat terrorism has the issue been politicised. In all cases a collective effort is often evident across all divides in seeking to deal a decisive blow to the terrorist scourge.

But not so in Nigeria where some of the world?s most murderous terrorist groups implicated in daily mass killings are embedded thanks to the likes of Malam Nasir El Rufai and other Northern leaders. Since independence, the politicisation of everything under the Sun has often led to emotional decisions and acts that ended-up not only leaving problems unsolved but also creating more problems. These remains the main reason solutions are never found to even the commonest problems in Nigeria. Boko haram and other murderous terrorist groups have been on the rampage in Northern Nigeria killing and maiming on a daily basis. Characteristically the response of El Rufai and other Northern leaders to the savagery of Boko haram has been to politicise the issue. They have constituted themselves apologists of Boko haram by equating a murderous terrorist group like Boko haram to MEND that engaged in a legitimate near bloodless struggle against exploitation and environmental despoliation of the Niger-Delta.

They have defended Boko haram claiming that it is not a terrorist group and even infamously requested   amnesty for a group that is easily the most savage and murderous terrorist group in the world. The almajiri phenomenom of   poverty which successive Northern leaders inflicted on their own people is blamed on everyone but themselves while the sponsorship of Boko haram is blamed on everyone but themselves.  Indeed   Murtala Nyako,  the disgraced/ impeached governor of Adamawa state  who notoriously became famous for his so called letter in which all kinds of spurious claims concerning Boko haram was made overreached himself  in the extent of fabrications and outright lies he propagated.  Recently a so called Northern elder?s forum gave the president a deadline to free the Chibok girls or forget re-election.  Such is the extent to which terrorist criminality has been politicised in Nigeria by the likes of El Rufai that it is no surprise the war on terror is not being won.

Not yet finished in their agenda to bandy lies and politicise terrorism,  a few days ago El Rufai published on his facebook page an allegation that the erstwhile chief of Army staff Lt General Ihejirika is a sponsor of Boko haram. As the story goes he got the information from an Australian negotiator Mr Stephen Davis who claimed he was informed by Boko haram that the former governor of Borno state Modu Sheriff and an unnamed former chief of army staff retired in January are their sponsors.  Curiously only these two were named as the sponsors of Boko Haram. Why would Boko haram be so stupid as to reveal their true sponsors when they depend on such sponsors for their survival? To any rational person with some brains such allegation especially that of General Ihejirika must rank as the most stupid and nonsensical story of the century. Not surprisingly,  El Rufai went to town with such a laughable fairy tale, a story I am sure even he does not believe, but seeing it as an opportunity for political mischief he jumped on the opportunity and published it on his facebook page where he finds good company with other misfits.

Anyone can claim to be Boko haram and there is so far no evidence that the people Mr Davis claims he spoke with are actually Boko haram terrorists. Even if they are, it is not plausible that Boko haram would reveal their true sponsors as that would be counter-productive. Boko haram is better served by creating diversions through misinformation. It is often said that common sense is not common, but El Rufai?s mischief is not driven by an absence of common sense but rather by a continuing attempt to politicise and deflect the responsibility for a problem they created themselves through decades of misrule and sponsorship of ethno-religious violence in the North that has now metamorphosed into terrorism. The lie in the allegation bandied by El Rufai is too obvious. Simple common sense would indicate that Boko haram cannot reveal their true sponsors for it will be self defeating to do so.  Firstly, how does it profit Boko haram to reveal the identities of their sponsors when that will surely lead to the evaporation of the support from their sponsors and possibly to vital information from the sponsors that might lead to their capture? Is it not common sense to realise that Boko haram cannot volunteer such information?

Secondly, Boko haram transitioned into terrorism in 2009 under Yar, Adua?s regime long before General Ihejirika became chief of army staff so how can he be sponsoring a terrorist organisation that preceded him? Thirdly General Ihejirika created special anti-terror divisions and waged a ferocious and very effective war on Boko haram to the extent that Northern leaders including El Rufai accused him of genocide and threatened to take him to the International criminal court for crimes against humanity; how then could General Ihejirika wage such a vicious war against Boko haram if he is one of their sponsors?  Fourthly how can a Christian from the South who has no interest in Islamic extremism be sponsoring a terrorist group that bombs churches, kills Christians and wants to create an Islamic caliphate in Nigeria?

Fifthly, is it not strange that only two people were named as the sponsors of a well armed group like Boko haram and is it possible that Boko haram will take orders from a Southern Christian to be destroying their own region?  Sixthly,  ethno-religious violence/ terrorism has existed in the North for decades, did General Ihejirika also sponsor Sharia riots, Maitsatsine riots, Denmark cartoon riots, Zango Kataf riots, miss world riots, Kaduna riots, the beheading of Gideon Akaluka,  Jos massacres and all the serial acts of mass killings/terrorism in the North since several decades? The more questions arise the more the lies and propaganda bandied by the likes of  El Rufai becomes obvious. With the way such fairy tales are being bandied, I won?t be surprised if soon the POPE and the president of the Christian association of Nigeria are named as sponsors of Boko haram   by El Rufai and his group.

The hard  fact remains that Boko haram is a creation of  misrule, social injustice, corruption and decades  of unpunished  ethno-religious violence in the North often targeting  Christians and people of other ethnic groups which people like El Rufai and successive corrupt  Northern leaders nurtured, supported , sponsored  and consolidated. Now that it has   evolved into terrorism and become a self devouring Frankenstein, there is no need to politicise or seek to shift responsibility for Boko haram. It is better for El Rufai and his co, travellers to quit their fraudulent antics and join hands with all and sundry to collectively seek ways to defeat terrorism as is done elsewhere. Continuing to politicise terrorism will only ensure that the North will remain trapped in a destructive scourge of terror that will in time lay waste to the region as is the case in Somalia.