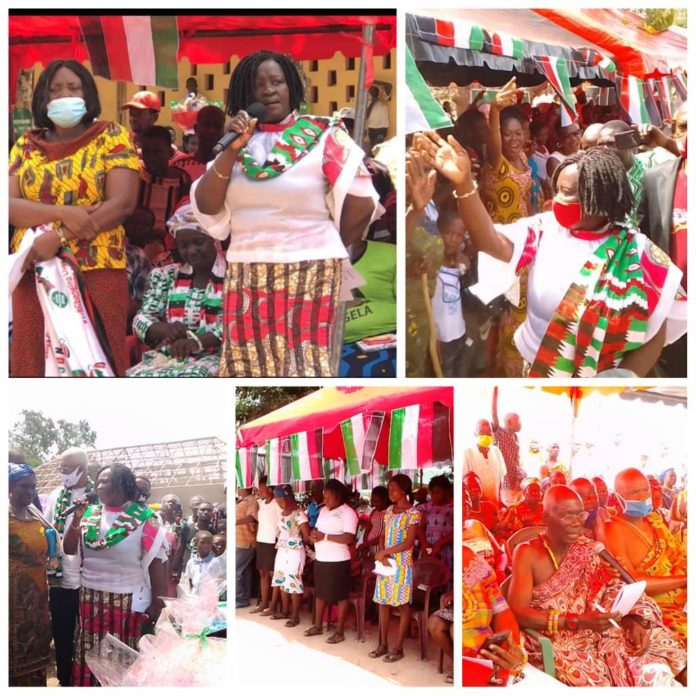 Professor Naana Jane Opoku-Agyemang, Running Mate of the National Democratic Congress (NDC), has said politics was about providing the needs for the citizenry.

“The elections before us is not the usual election. We are going into this election to vote for someone who deals with our problems in a respectful way.”

Prof Opoku-Agyemang addressing a durbar of Chiefs and people of Have-Etoe in the Afadzato South Constituency as part of her tour to the Volta Region, noted that politics was about development and meeting the needs of the people devoid of insults.

“We all know the Party that comes and brings development and builds schools.”A very important aspect of devilment is about training your workforce to meet your needs and not trained them half way and when it comes to the big job, we go and look for people to come and do it.”

She said the Party had already began stimulating apprenticeship programmes and urged the electorate to vote for the NDC to advance plans to equip graduate youth under its “big push.”

The Running Mate said the Party’s manifesto had tackled most problems of the citizens and the reason why the Party needed to be voted for to serve and meet employment needs of Ghanaians.

She urged members of the Party not to be influenced by money, which could not last nor provide hospital for them.
Prof Opoku-Agyemang called on them to endorse the Parliamentary Candidate (PC) and vote for a government that do not put fear in the people and discriminate.

“As women, one way to show appreciation to Mr John Dramani Mahama, Flagbearer of the Party for respecting women and placing value on them was to vote massively.”

Mr Henry Ametefe, NDC Volta Regional Chairman, noted that the Party would work on the deteriorating Eastern Corridor road if the party’s mandate was renewed.

Togbega Adanu Sakrafo X, Paramount Chief of Goviefe Traditional Area, extolled the humility of the Party’s Running Mate and thanked the Party for her selection.

He said the NDC had undertaken a lot of development projects in the Constituency adding that “if it is the will of the almighty God and our ancestors that you will come back to power, may it be so.”

Madam Angela Oforiwa Alorwu-Tay, Member of Parliament (MP) and PC of the Afadzato South Constituency, said the Party in the Constituency under her leadership had resolved to tackle numerous challenges including; health and unemployment.

“The level of unemployment among the youth of our Constituency continue to increase like other Districts. This makes their livelihood a very difficult one.”

She said a development programme to equip the youth with skills in bread making, carpentry and hairdressing would reduce youth unemployment.

The MP together with the Running Mate handed over working tools and certificates to 500 graduates under the programme.