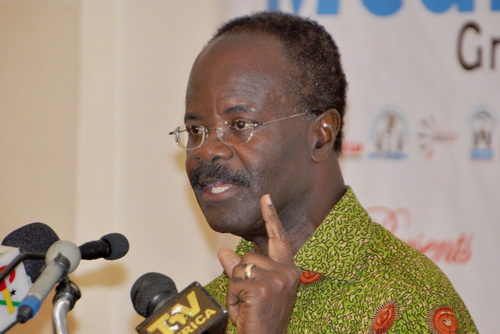 Have tried several times to write a speech for today. But I failed. At every turn it got too emotional too negative, too personal so unlike me some would say, so no speech today. Just some random thoughts:

I was in dreamland.
And it was a nightmare.
It was all a pre-meditated, deliberate act.
Politically motivated.
And I will never forget that day.
It weakened what should be a strong, independent state institution.
It proved to me who my real friends are.
It showed the pettiness of some of our so-called leaders.
October 10th was an embodiment of politics of exclusion.
Indeed it stood as a symbol of our national “governance by exclusion”.
It made me begin to realize how naive I had been about politics in Ghana.
The idea that we do it to serve our many people was broken.
“They” rejoiced because by elimination, one of them would win.
No need to wonder a “what if”
Truly, it broke our campaign.
Four years of organizing, hard work, emotions
And huge investment of our hard-earned Ghanaian money, from party faithful,
Gone!
Campaign contribution pledges disappeared.
“The” opponents had a field day.
They immediately went to the field.
They told our parliamentary candidates to give up.
They told our supporters that our PARTY was no longer in the race.
“How can you have a living body without a head?”
We put on a brave face.
But we knew.
We had been dealt a fatal blow.
So now, whenever someone tells me
Ghanaians have decided that we should have a two party state
I know
You see, to many of our people, politics is a means,
To get the good job, decent house, nice car,
and high status in society.
Politics to some big people is a means,
To get that big government contract and loads of free cash.
To the many poor, politics means,
Election time will come so that they can get something,
In exchange for their votes.
And by real friends and family kept yelling,
Why do you want to do this?
I continued to campaign,
To keep our candidates and core supporters in the field.
And people kept asking,
Why are you campaigning when you have been disqualified?

It is important for us to note what the political parties law says about our freedom to join and work with political parties of our choice. I recall this to show that the State institution set up to ensure our freedoms cannot be the one that acts to disenfranchise anyone in anyway.

“THE REPUBLIC OF GHANA ENTITLED THE POLITICAL PARTIES ACT, 2000
AN ACT to revise the statute on political parties to bring the provisions in conformity with the Constitution and to provide for related matters.

Part I: FOUNDING AND REGISTRATION OF POLITICAL PARTIES

Participation in politics
2. 1- Subject to the constitution, every citizen of voting age has the right to participate in political activity intended to influence the composition and policies of the government.
2- No member of any Organization or interested group shall be required to join any particular party by virtue of his membership of the organization or group.
3- Any person who.
A. suppresses or attempts to suppress the lawful political activity of another person contrary to subsection (1) or
B. requires any person to join any particular political party contrary to subsection (2),
commits an offence and shall on summary conviction be liable to a minimum fine of two million cedis or to imprisonment for a term not exceeding five years or to both.”
Some suggestions:
1. To give it a better chance of being independent, members of the Electoral Commission should not be chosen by the President alone. Parliament and Political Parties in good standing should participate in the process.
2. The Electoral Commission should be given technical assistance to develop rules to ensure political parties comply with conditions of their certification.
3. The Electoral Commission should be given technical assistance to develop rules and procedures to ensure that only Ghanaians fund political parties and their campaigns; and prevent the use state of funds by parties in power to fund their parties and campaigns.
4. Ghanaians must not support the two party agenda. A two party dictatorship is one step away from a de facto one party state. Two heads, one body is no choice. Our people must support alternatives to strengthen our infant democracy.

Today, Tuesday April 3, thousands of executives and card-carrying members of the Progressive People’s Party (PPP) across the country will confirm me as their candidate for the 2012 presidential election. A number of business associates, international professional colleagues and some family members ask me every now and then why I am in politics and also why I intend to contest the 2012 presidential elections. They wonder why I would subject myself to all kinds of negative and sometimes insulting comments from all manner of people.

Simply put, I am interested in becoming the President of the Republic of Ghana because I have something positive to offer my country and its people. I am capable of leading a team of the best men and women to transform Ghana today from third world to first in a record time, with urgency, selfless dedication to work and discipline.

I consider myself a very lucky man. I had the benefit of caring, hard working parents who believed in service to God and the public. I thankfully have a loving, and supportive wife and well-adjusted children who are doing well in their chosen fields of study/work. I have been blessed to have reached the top of my profession as an international management consultant. I have had the opportunity to be an entrepreneur on a national scale in the financial, hospitality, real estate, media, technology and financial industries. One of my greatest joys is to observe the improvement in the standard of living of the over 2,000 employees our company Groupe Nduom has countrywide. I have what I need and more. What is left for me to do is offer service with excellence to my country so that its people can become prosperous in a Ghana that is peaceful.

In February 2001, I accepted the offer approved by the CPP’s Central Committee to serve the people of Ghana through the J. A. Kufuor-led Administration. That decision cost mea lot. I had to resign my position as Chairman of the Deloitte & Touche Africa region’s Board of Directors and head of management consulting. I lost my hard-earned position as shareholder/partner of the firm. I gave up many business opportunities as a result of being in government. I engaged the services of a trustee to supervise my private business affairs. While in government, I lived in my own home.

Since January 2009, I have had to work harder than ever to restore business value. Thankfully, I have been able to engage some good professionals who together with my children will keep the business vision alive. The point is that I cannot be in politics because of my “stomach”.There is nothing in government to tempt me to engage in “prostitution” of any type. It is all about sacrifice in the national interest. The only thing that tempts me is the will to transform Ghana, and not “prostitution “or “stomach politics”. I firmly believe that it is noble to serve one’s country.

I believe in inclusiveness. I believe passionately that using the best brains in Ghana regardless of political, ideological leanings can help transform Ghana in what remains of my lifetime. I believe we can transform Ghana from a beacon of freedom in Africa to become a prosperous country on earth through a considered method of forming a government using the best men and women without regard to ethnic, religious or political considerations. This will not come easily. It will take a lot of hard work and sacrifice. It will require withstanding ridicule from some members of the public and opposing political parties. We will have to overcome old UP/CPP/AFRC/PNDC wounds. Worse, it will take a real battle between those who want to go back to pre – 1966 days and the ones who want a forward march into the 21st century. But, it is a battle worth fighting. Ghana needs a political leader who is truly for giving advantage to Ghanaians in all fields of endeavour economic, social, etc and one that will promote equal opportunity for all of our people without regard to ethnic,religious, geographic or social standing considerations. I am that leader.

I am not interested in an East-West political, economic or ideological divide to distract our attention from the difficult task of solving our huge infrastructure deficit and eliminating poverty. I will not be guided by the socialist-capitalist struggle as an independent, practical leader only moved by need to solve the basic human problems of the people in order to create a great Leap Forward. I have studied all our past leaders and those from South Korea, Malaysia, Singapore, Mauritius and progressive leaders from the developed world. I will use the best ideas they applied successfully in their countries but fine tuned to suit our environment.
,
Ghanaians can expect from me an uncompromising adherence to the principles of social justice and self-determination. It is time we brought the economy back home to benefit our own people. I will be an activist leader of the positive type. In that regard, I aim to present visionary leadership that is vibrant and one that connects positively with all of the people.

To enable transformation to happen in Ghana, I will promote a real, tangible change in attitude, commitment and a strong competitive spirit. A government led by me will apply the full weight and authority of the state to liberate Ghanaians in an unapologetic manner. We will champion the cause of “Yen ara asaase ni”. This means making formal education a right for all and not a privilege, giving the Ghanaian entrepreneur advantages by the use of the state’s purchasing power and giving power back to the people through the right to elect those who govern them in their local communities. It means the state making it possible for Ghanaians to live in an environment that is clean, hygienic and free from preventable diseases like malaria and cholera. I will put the Ghanaian in front of everything that happens in this country and not parochial interests.

I will lead a real, formidable alternative in Ghanaian politics whose policies will make a positive difference in the lives of our people for years to come. I am prepared to work in a way that is different with forward- looking people who are willing to work and make sacrifices and with a single purpose vision of making Ghanaians proud and prosperous in their own country. I want to be focused on eliminating poverty, preventable diseases, educating all children and promoting the Ghanaian private sector to create well-paying jobs at home.

What we need is youthful enthusiasm and a strong commitment to discipline, the type that forges unity within our ranks. We should develop as a broad, mass party, one that connects with traders, farmers, fishermen, workers of all type, professionals and business owners. We need to build a broad mass of support by welcoming into our fold young men and women, workers, professionals who today want opportunity to be guaranteed to all. The principle of social justice well articulated will make a huge difference with independent or floating voters and independent-minded people. I believe that under my leadership, Ghana will be a winner.