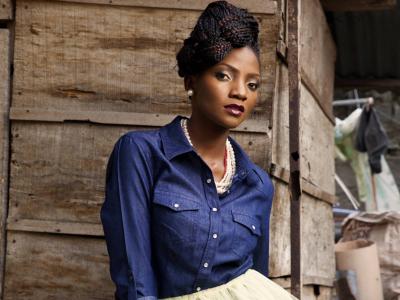 Pop star Simi, X3M Music?s recent signee and label mate to R&B superstar, Praiz, has released two new singles from her forthcoming sophomore album.
Titled Tiff and E No Go Funny, the singles were released on Monday, June 9, 2014.
The dance track, E No Go funny- with its jumpy beat, interesting lyrics and sing along chorus is already making waves around the country. The song finishes with a beautiful blend of African instrumentals thus giving E No Go Funny an authentic African sound.
On Tiff with its great delivery and semi-groovy beat, Simi delivers touching lyrics, that is already being felt by many –  ?This jam, Tiff makes you want to fall in love?? popular rap artist Cyrus da Virus says.
Plans for the video of Tiff are already underway and the label says we should expect the video soon.
?My music is different from the usual? Every song I sing is created out of a desire to make an impact. ?Tiff? and ?E No Go funny? are singles that speak to young hearts and so far, I?m impressed with the reception the singles have gotten.” Simi says.
“I thank God for these two singles and I’m very excited about them. For me its just fun all through and I’m loving it? the singer adds.
Her debut album ? Restless EP, which was produced by Samklef was launched in 2008 and had hits like Ara Ile and Iya Temi.
The beautiful and talented Simi has been extolled by many big names in the music industry. Music producer Oscar Heman Ackah, calls her ?a breath of fresh air?, Folashade Anozie, A&R Manager X3M Music said ?Simi is the next big thing?.
Listen to Simi’s Tiff here; https://soundcloud.com/x3mmusic/simi-tiff

Majority of Ghanaians lost confidence in the economy – Afrobarometer