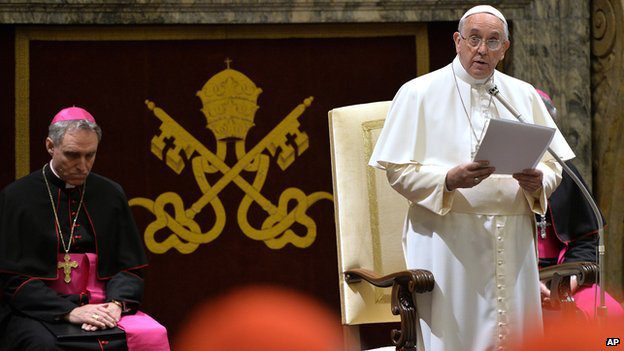 Pope Francis visited a paediatric hospital in Bangui on Sunday

The Pope is meeting Muslims who have sought shelter in Bangui after nearly three years of violence between Christians and Muslims.

Most Muslims have left the capital but 15,000 are left in an area called PK5 surrounded by armed Christian militia.

Pope Francis will conclude his visit to Africa with a final Mass in Bangui.

On Sunday, the Pope called on fighting factions in the CAR to lay down their weapons.

Celebrating Mass in Bangui, he said they should instead arm themselves “with justice, love, mercy and authentic peace”.

Earlier, he said he hoped next month’s election in the CAR would open a “new chapter” for the country.

The CAR has been torn apart by violence between Muslim rebels and Christian militias.

It is the pontiff’s first visit to a conflict zone and the final stop on his landmark three-nation African tour.

Acting President Catherine Samba-Panza has asked him for “forgiveness” for the country’s recent religious violence.

Hundreds of people waited amid tight security but in a calm atmosphere ahead of the Pope’s visit to the Koudoukou mosque in Bangui on Monday.

After meeting local Muslim leaders, Francis will address the crowd and is expected to continue his theme of religious reconciliation.

On Sunday, large crowds had lined the road from the airport to welcome the Pope – and people cheered and sang when he arrived at a refugee camp.

In an address at the presidential palace, he called for unity and to avoid “the temptation of fear of others, of the unfamiliar, of what is not part of our ethnic group, our political views or our religious confession”.

The Pope said ahead of his trip he was determined to bring a message of peace and hope to the country.

War has blighted the CAR for decades but it was only two years ago the fighting took on a religious form.

President Francois Bozize was ousted in a coup in March 2013 and a group of mostly Muslim rebels from the north, the Seleka, marched on Bangui, briefly taking control of the country.

In Uganda, the Pope celebrated Mass in front of an audience of hundreds of thousands of people, and spoke at a Catholic shrine dedicated to Christians martyred for their faith in the 19th Century.

On Friday, the Pope addressed an audience of young people in the Kenyan capital, Nairobi, urging them to unite and take a stand against the destructive effects of tribalism.

Their rebellion tapped into a feeling northerners had of being excluded and unrepresented by the central government, correspondents say.

They targeted churches and Christian communities, which triggered the creation of the anti-Balaka – meaning anti-violence – militias, and led to a downward spiral of tit-for-tat violence which continues.

Towns and villages are divided, with hundreds of thousands of people displaced into camps divided along religious lines.