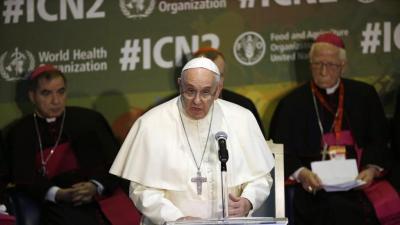 Pope Francis has on highlighted the importance of rural development and the essential role played by the United Nations’ International Fund for Agricultural Development (IFAD) in achieving the first two Sustainable Development Goals – ending global hunger and poverty.

“None of this will be possible without achieving rural development, a development that has been talked about for a long time but has not fully materialized,” the Pope said, addressing Member States gathered at IFAD’s 42nd Governing Council in Rome.

The progress we once claimed in reducing hunger has stalled. Today, nearly 821 million people suffer chronic under-nourishment, 37 million more than in 2014,” said Houngbo.

Given this reality, Houngbo urged those present to invest more in rural development in order to prevent future crises of hunger, poverty and migration.

The Pope said the world has achieved great scientific and technical advances and now has the capacity to win “the battle against hunger and misery, if it is taken seriously.”

He called on government leaders to work together to make the slogan “hunger does not have a present or a future, only a past” a reality.

Speaking of the world’s poor and hungry people, he said “I would like us to be able to look at their faces without blushing because their cries have been heard”.

The Pope urged all those who have responsibilities in national governments and international organizations, as well as those who can contribute from the private sector, to develop and implement the necessary mechanisms and measures to enable rural people to become the architects of their own development.

“Today more than ever,” he said, “we must join efforts, achieve consensus, strengthen ties.

The current challenges are so intricate and complex that we cannot continue to deal with them on an occasional basis, only with emergency resolutions. ”

The Pope assured the audience that IFAD has achieved great results in its fight against hunger and poverty, “promoting South-South cooperation, diversifying funding sources and modes of action, promoting action based on evidence that, at the same time, generates knowledge.”

He said that the world must “rely on innovation, entrepreneurial capacity and the central role of local actors.” Pope Francis concluded by saying that the path of rural development is “humble, but fair” and when followed to the end provides “a harvest of justice and prosperity.”

Since 1978, we have provided US$20.4 billion in grants and low-interest loans to projects that have reached about 480 million people.

IFAD is an international financial institution and a specialized United Nations agency based in Rome – the UN’s food and agriculture hub. More about IFAD: www.ifad.org.