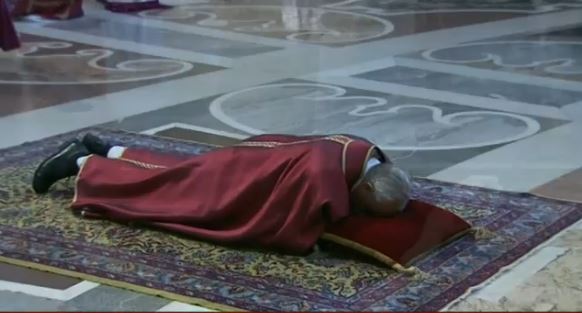 Africa’s beauty, which inspired people to praise God, was at risk, the Pope said

There have been concerns about the pope’s safety ahead of his visit.

The Pope has said he is determined to bring a message of peace and hope to a country where elections are due to be held next month.

This is the third and last leg of his trip after visiting Uganda and Kenya.

During his visit, the pontiff will celebrate Mass in the capital, Bangui, but is also expected to meet Muslim leaders and visit a mosque in the city’s Muslim enclave, known as PK5.

In Uganda, the Pope celebrated Mass in front of an audience of hundreds of thousands of people, and spoke at a Catholic shrine dedicated to Christians martyred for their faith in the 19th Century.

The Mass marked the 50th anniversary of the martyrs’ canonisation.

On Friday, the Pope addressed an audience of young people in the Kenyan capital, Nairobi, urging them to unite and take a stand against the destructive effects of tribalism.

War has blighted the CAR for decades, but it was only two years ago the fighting took on a religious form.

President Francois Bozize was ousted in a coup in March 2013, and a group of mostly Muslim rebels from the north, the Seleka, marched on Bangui, briefly taking control of the country.

Their rebellion tapped into a feeling northerners had of being excluded and unrepresented by the central government, correspondents say.

They targeted churches and Christian communities, which triggered the creation of the anti-Balaka – meaning anti-violence – militias, and led to a downward spiral of tit-for-tat violence which continues.

Towns and villages are divided, with hundreds of thousands of people displaced into camps divided along religious lines.