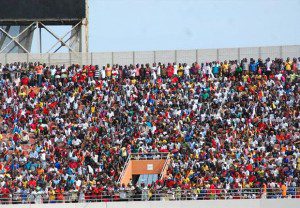 The Porcupine Warriors will host their arch rivals Hearts of Oak on Saturday in the league?s biggest fixture.?Even though Asante Kotoko and Accra Hearts of Oak will dominate the airwaves this Saturday, there are some other intriguing fixtures to look up to at the seven other centres. League leaders, AshGold are making a trip to Accra to face Liberty Professionals. With Hasacas and Aduana Stars closely chasing AshGold, the Miners will be under pressure to maintain their top spot.

Accra Great Olympics have a difficult task at hand as they host Sekondi Hasacas. Olympics, who lie at the bottom of the table, have won just one match and lost the remaining four of their fixtures.

At the T and A Park, Medeama SC have been paired with Berekum Chelsea. The away side will be led in attack by Stephen Baffour, who has netted four goals so far.

Aduana Stars are favourites to pick all three points against B. A United in Dormaa, while Bechem United lock horns with WAFA.

Wa All Stars, who snatched a draw at Kotoko last Wednesday are playing as guests to New Edubaise United.

FA Cup finalist, Inter Allies, have a date with Heart of Lions in Kpando. Both teams have seven points from five matches.

In Kumasi, Asante Kotoko will be hosting the Super Clash against Accra Hearts of Oak. Herbert Addo?s side have not been impressive, having lost ten points in their five matches, and conceded eight goals in the process. Kotoko go into the game as slight favourites.