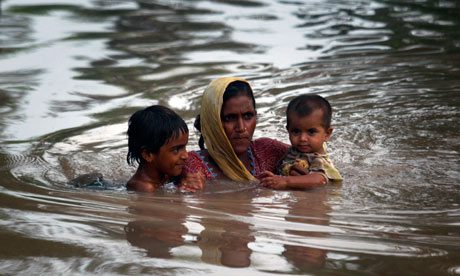 Pakistan was rushing Tuesday to treat outbreaks of malaria and dengue in the central province of Punjab, as the death toll in the wake of two weeks of flooding crossed 300. Authorities dispatched medical aid, including teams of doctors and paramedics, to several towns of the flood-hit area, the National Disaster Management Authority said.

Mudslides and flooding have killed around 312 people in Punjab and parts of the Kashmir region, Zuberi said.

At least 2.4 million people had been displaced in Punjab. Thousands more were being evacuated further downstream in the southern province of Sindh, Zuberi said.

Indian authorities said 200 people had died in their part of Kashmir.

Floodwaters were receding in Srinagar, capital of Jammu and Kashmir state, but fears of disease were rising as water levels remained high.

“In this situation, there is a possibility of the outbreak of waterborne diseases and our main focus now is to protect people from this,” Chief Minister Omar Abdullah said.

Large parts of Srinagar were still submerged. Drains were blocked and garbage, along with the bodies of dead animals, was floating around.

The Srinagar municipal corporation had started a clean-up operation, but officials said it was a mammoth task that could take weeks.

“If we are able to remove the animal carcasses, the problem remains of where to bury them,” one official said.

There are several cattle farms inundated with carcasses along the borders of the town.

“People are complaining of a foul stench around the city and many people have skin rashes,” local journalist Akeel Hassan, who is involved in rescue and relief work, said. “Mosquitos have started breeding and there is panic all around.”

In Jammu and Kashmir, rescue workers have reached more than 237,000, the Indian government said. But at least 100,000 were still trapped in their homes, IANS news agency reported, citing unnamed officials.

The level of the Jhelum river in Srinagar had dropped below the danger mark and rations, drinking water and medicine were being distributed, Abdullah said.

More than two dozen water filtering plants had been airlifted to Srinagar along with 13 tons of water purifying tablets, a Defence Ministry press release said.

Ethiopia plans to return more than 102,000 citizens from Saudi Arabia