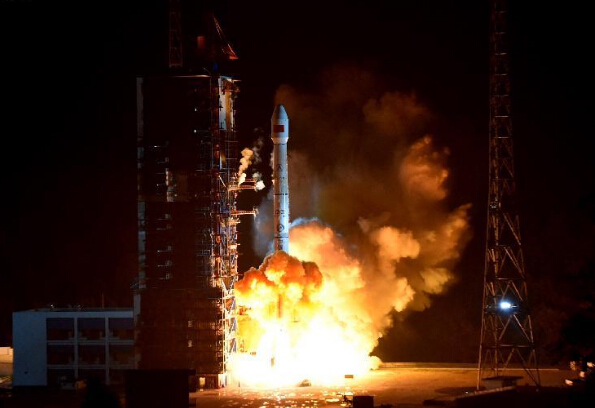 China will launch its most advanced communications satellite in April as it builds a large capacity network that will enable passengers on jetliners and high-speed trains to use the internet.

Shijian 13, developed by the China Academy of Space Technology, will be lifted on a Long March-3B carrier rocket from Xichang Satellite Launch Center in Sichuan province.

The satellite, which weighs 4.6 metric tons, will stay for 15 years in a geostationary orbit about 36,000 kilometers above Earth, the academy said.

Shijian 13 will use electric propulsion after it enters orbit, which will extensively reduce the chemical fuel the satellite carries. Moreover, it will conduct space-to-ground laser communications experiments, the academy said.

In June, the Shijian 18 communications satellite, the first developed based on China’s new-generation DFH 5 satellite platform, will be lifted by a Long March 5 rocket at the Wenchang Space Launch Center in Hainan province, according to the academy.

It said the transmission capacity of the satellite to be launched in June is double that of current Chinese communications satellites, allowing more television channels and clearer programs to be transmitted. The new satellite will also improve internet connectivity and accessibility as well as reduce users’ costs.

Wang Min, deputy head of the academy’s Institute of Telecommunication Satellite, said China plans to establish a constellation of advanced communications satellites based on DFH 4 and DFH 5 platforms by 2025 and, after the plan is fulfilled, people will be able to use high-quality Wi-Fi service anywhere and anytime, including on bullet trains and planes.

Li Feng, chief designer at the institute, said many domestic users have said they look forward to the service of new-generation communications satellites, while some foreign satellite operators have also expressed interest.

The academy has made seven communications satellites for overseas users, including Pakistan, Venezuela and Laos, and is implementing export contracts for more than 10 such satellites, said Zhou Zhicheng, head of the Institute of Telecommunication Satellite.

However, he said the country still needs to catch up with the top developers of communications satellites in the United States and Europe, such as Boeing and Thales Alenia Space, when it comes to satellite technology and capacity.