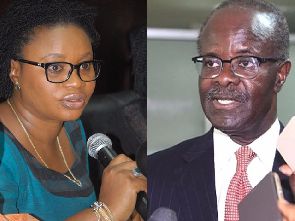 Lawyers for the Progressive Peoples Party (PPP) head to the High Court today to push for an order to stop the Electoral Commission (EC) from disqualifying the party from the December polls.

Lawyers from both sides are expected to present their oral submissions Tuesday, October 25, after which a date will be set for judgment.

PPP’s legal team, led by former Deputy Attorney General, Ayikoi Otoo, will be making a strong case for the EC to be restrained from proceeding with balloting for the position of presidential candidates for the 7th December elections.

They will also be praying the court to compel the EC to grant the PPP 2016 presidential candidate, Dr. Papa Kwesi Nduom, the opportunity to amend and alter the anomalies on his nomination papers.

The PPP hauled the Electoral Commission to the High Court on October 14, 2016, claiming that the elections management body did not only breach the rules of natural justice in its disqualification of Dr. Nduom but also failed to act in accordance with due process of law.

The PPP leader had a double setback to his campaign over the last couple of days when a key member of his campaign Mrs. Eva Lokko died last week, only for him to be disqualified this week.

He was one of 12 presidential aspirants disqualified for acts of fraud, negligence, and irregularities committed on their nomination forms.

One of Dr. Nduom’s subscribers, Richard Aseda, was accused of flouting sections of CI 94 by endorsing the PPP flagbearer twice – the Central Region and Volta Regions – with different signatures.

Under the law, one person was supposed to have endorsed the flagbearer in each district.

On the 10th of October, the EC Chair, Mrs. Charlotte Osei announced a list of 12 candidates whose nomination forms were pregnant with mistakes and therefore could not be accepted. A thirteenth candidate, Akwasi Addai had his nomination withheld because of a pending legal suit against him.

But the PPP is challenging the disqualification. Whilst conceding that administrative errors were committed in the filling out of the forms, Dr Papa Kwesi Nduom has been unequivocal that those mistakes could not have been grounds for his disqualification.

Not even a five-minute discussion with the EC chairpersons has yielded any positive result for him.

The PPP said the EC cannot claim to be immune from mistakes and cited a case where the elections governing body wrote ‘1,700’ cedis on a receipt for a 1.7million cedis payment made as filing fees for the PPP parliamentary aspirants.