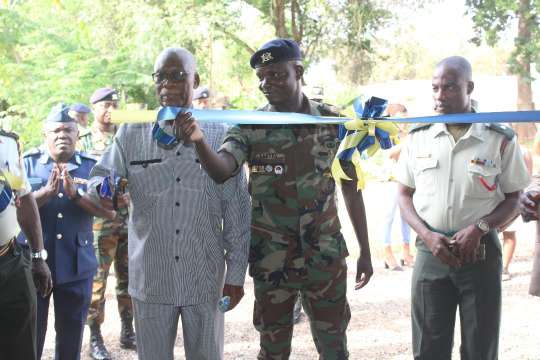 Colonel Wilberforce Seth Kwaku Agbee (Rtd)Former Deputy Defence Financial Comptroller has called on personnel of the Ghana Armed Forces to plan adequately for retirement as they continue to move closer to the retirement age on daily basis.

He said in as much as the GAF may assist with seminars and educational programmes on retirement and personal financial management, the ultimate responsibility rest with the individual officer to be prepared for retirement when the time comes.

Col. Agbee was speaking at the 2019 end of year get-together of the Forces Pay Regiment (FPR) held on the theme: “Delivering Innovative and Efficient Service to Sustain the Morale of the Ghana Armed Forces Personnel” at the weekend.

As part of the event, Col. Agbee commissioned the newly built FPR Artisan’s Offices that has a barbering shop, tailoring shop and a General Office as part of efforts to decongest offices by building new ones.

He said after his retirement, the Regiment had remained committed to its core mandate and that there had not been anything untoward, adding that, “Being responsible for the pay and allowances of the Ghana Armed Forces is a huge task”.

He urged the personnel to hold on to the core military tenets, which include discipline, loyalty and esprit de corps saying that, in an era when indiscipline had crept into the fabric of many institutions in the country, the military has no option but to be the beacon of hope for other organisations.

He said they were fully aware that a good service delivery especially from the Regiment, would help sustain the morale of the personnel of the Ghana Armed Forces, adding that, there were challenging times but with single-minded determination and innovation, they were able to overcome.

The Commanding Officer of the Regiment paid tribute to his predecessors for laying a solid foundation had enabled him to stand tall.

Lt. Col. Laryea said issues confronting the Regiment were congestion in the offices due to growing number of personnel; need to ensure a conducive working environment and inadequate accommodation for unit personnel.

He called on corporate bodies to come to the aid of the Regiment to complete its massive accommodation project, a legacy started under the watch of Brigadier General D.K Amissah as the Former Commanding Officer and now the Defence Financial Comptroller.

He urged the personnel of the Regiment to undertake a sober introspection of events in this year and reposition to face any challenge that 2020 would present, seizing the opportunity through discipline and diligence.