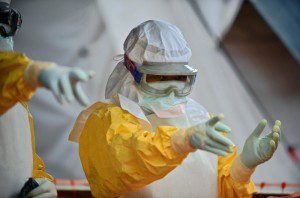 Frontline health staff of Widana, Woriyanga and Garu health centres, who also received the PPE, were trained on how to wear and remove the equipment in order not to get infected with the virus.

It is on records that some health professionals usually got infected when removing the PPE hence the need for the training.

The service had trained 50 frontline health staff on the management of Ebola cases and engaged 32 community health committees including traditional authorities on early detection of suspected cases for prompt referrals.

Mr John Alaale Abugri, General Manager of the Presbyterian Health Service-North, said the service, with support from the Canadian Fund for Local Initiative, procured the Personal Protective Equipment and trained the health staff.

He said apart from the training and equipment, the support from Canada also aided them to undertake social mobilisation and training of health workers and traditional rulers on Ebola detection and prevention.

He said interactive radio discussions and drama on Ebola detection and prevention were currently being held in all the five local languages namely Kusaal, Bimoba, Hausa, Moshie and Bisa.

Mr Abugri said considering the fact that the area shared borders with Burkina Faso, Mali, Niger and Togo, it was important to be well prepared to contain the situation should the disease surface.

?The Presbyterian Health Service-North is on guard to ensure that no eventuality overtakes us. We have set up Ebola isolation units and plans are far advanced to constitute a disaster preparedness committee,? he said.

Mr Rudolf Abugnaba Abanga, Programme Manager of the Presbyterian Health Service – North, who lauded the Canadian High Commission for the support, entreated health workers to work assiduously to prevent the Ebola virus from entering the country.