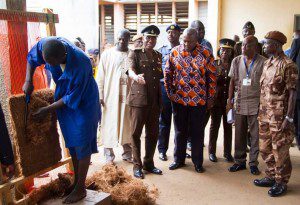 President John Dramani Mahama has tasked the Director General of the Ghana Prisons Service, Matilda Baffour- Awuah, to present to the Presidency proposals for consideration of remission of sentences for prisons inmates based on good behaviour.

The President hinted that when remission of sentences based on good behaviours is considered it will cover inmates who have served parts of their sentencing and are of good behaviour.

Addressing a gathering of Prison inmates, Prison officers, Prisons Council, Prison Ambassadors and the media, the President reiterated that ?added to  this amnesty is the possibility  of remission of sentencing for good behavour. We will consider remission of sentences and amnesty on good behaviour?.

President Mahama in his address assured the inmates that they are not forgotten, adding that his visit to the Prison has served as an eye opener for him to see the conditions under which they live. He assured the inmates that his government will first build two more prison blocks in addition to what exists to decrease the overcrowding situation in the other prison blocks.

He hinted that his government will look at increasing oppoertunities for improving the skills of the inmates? in terms of training and education. ?After my visit here, my major priority is to improve the prison, not just Nsawam but all the prisons throughout the country?.

I have heard of how well, the students here are excelling in the basic and senior secondary exams. I have also noted that it is difficult to continue to the tertiary level, I would work  to ensure one  of  the tertiary   institutions to start a distant  learning programme  to help inmates to get to the tertiary level?, he emphasized

For the prisons officers, President Mahama  assured them that he was concerned about their welfare and the conditions under which they serve, hence coming along to visit with the finance Minister Seth Terkper.

?I will improve  the welfare of officers  and ask for more budgetary allocations from the Finance minister to improve your working conditions, since a well motivated  officer is the one who will look after inmates? well.

The President in his addressed pledged support for project Efiase and cautioned the prisoners who have been granted amnesty to  guard it with care and  serve as advocates and ambassadors to prevent other  young people  from falling foul with the law. He also promised to visit them from time to time to acquaint himself with the ongoing reforms in the prisons.

On his part Chairman for the Prisons Council, Rev Stephen Wengam appealed to the ministries, corporate bodies and all stakeholders to outsource contracts to the prisons as they exhibit so many skills.  He also called on the public to assist in the ongoing reforms.

As part of his visit t the Prisons, the President inspected the skills training centers, two prison cells which included the place for the condemned prisons and the Infirmary. He also donated  60 bags of rice, 30 bags of sugar,50 bottles of oil and  30 boxes of mackerel, this he hoped will cause an improvement in their diet. The President was accompanied by her Ladyship, Georgina Theordora wood, Deputy Minister of Interior, Hon. Agalga, Finance Minister, Seth Terkper, the Eastern Regional Minister and the National Security Advisor and the Prison Ambassadors.

The President?s historic visit to Nsawam Maximum Prison makes him the first sitting President in the history of Ghana to visit the prisons since Dr. Kwame Nkrumah.  He also presented an amnesty certificate to one of the inmates? who had been granted amnesty.