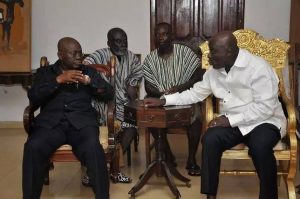 President Nana Addo Dankwa Akufo-Addo will later today join his kinsmen in a thanksgiving durbar organized in his honour by the Okyeman Traditional Council at Kyebi.

The event which is being championed by the Okyenhene Osagyefuo Amoatia Ofori Panin, is aimed at thanking God for honouring Nana Akufo-Addo, an Akyem-Abuakwa royal, with electoral victory in the December 7 presidential poll.

The forecourt of the Ofori Panin Fie at Kyebi, in the East Akim municipality of the Eastern Region, will attract  the paramount chiefs of the Okyeman Traditional Council, natives in the diaspora, the bigwigs of the New Patriotic Party (NPP), and party supporters will welcome the new president.