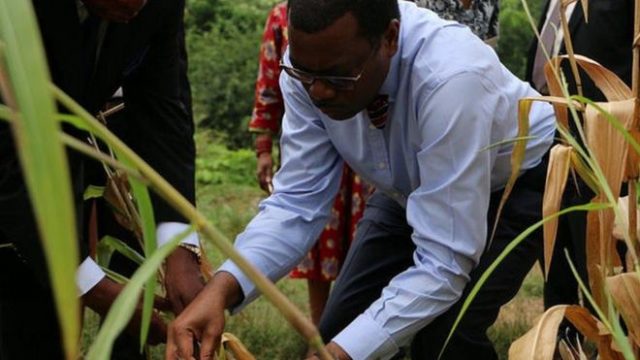 The World Food Prize 2017 goes to Dr. Akinwumi Ayodeji Adesina, President of the African Development Bank Group “for helping Africa get it right in agriculture and making it a key player of securing food for the world.”
The World Food Prize board chose Adesina this year for the $250,000 prize, highlighting his role in improving the availability of seed, fertilizer and financing for African farmers, and for laying the foundations for the youth in Africa to engage in agriculture as a profitable business.”
The official announcement of the Prize was made during a ceremony Monday at the U.S. Department of Agriculture in Washington D.C., hosted by its Secretary, Sonny Perdue. “Adesina will receive the $250,000 award administered by the Des Moines-based World Food Prize Foundation in a ceremony at the state Capitol in October,” he said.
The prize was founded by Norman E. Borlaug, a native of northeast Iowa who was awarded the 1970 Nobel Peace Prize for his life’s work on feeding the world through the scientific advancements of the Green Revolution.
Perdue commended Adesina for his tireless work in securing food for Africa and the world. He however pointed out that there were still huge challenges on the way as the world population grows raising the challenge of feeding 9 billion people. “Adesina knows that our work is not done,” he said.
Speaking at the event, which brought together key players in the world of bilateral and multilateral development, Adesina said he was inspired by a commitment to transform African agriculture into a means for lifting millions out of poverty and is proud his work has been recognized. “It’s vitally important to show young people in rural regions of Africa that farming can be profitable and can improve their lives…”
In choosing Adesina for this year’s award, the organization recognizes his endeavors at the Bank Group to implement the ambitious High 5 priorities (Light up and power Africa, Feed Africa, Industrialise Africa, Integrate Africa, and Improve the quality of life for the people of Africa), and the positive impact this would have in Africa and the world. Adesina’s forte is his strong ability to build partnerships that enabled commercial banks and development organizations to provide loans to tens of thousands of farmers and agribusinesses in Kenya, Tanzania, Uganda, Ghana and Mozambique. As Nigeria’s minister of agriculture from 2011 to 2015, he made his mark by creating programs to make the country self-sufficient in rice production and helped turn cassava into a major cash crop and a strategic raw material for Bakeries. Above all, Adesina’s success in enabling Nigeria’s farmers increase farm yields through an electronic wallet system that helped them obtain fertilizers, led to dramatic improvement in agricultural production and enhanced food security for 40 million people in the country’s rural farm households.

Commenting on the award, African Development Bank’s Chief Regional Programme Officer for Eastern Africa, Laté Dodji Lawson Zankli said: “I am glad our President is recognized worldwide as a man of value. He has plenty of wisdom to share. By being a man of value, he has become a man of success. He is an inspiration to many young Africans.”

The World Food Prize 2017 award adds to a long list of global laurels the AfDB President has earned in the course of his distinguished career. Two weeks ago, he received the 2017 Gene White Lifetime Achievement Award for Child Nutrition In 2010, UN Secretary General Ban Ki-moon appointed him one of 17 global leaders to spearhead the Millennium Development Goals, along with Bill Gates, the Spanish Prime Minister and the President of Rwanda. He was named Person of the Year by Forbes Africa magazine in 2013 and featured among 100 most reputable persons on earth in a list released by South Africa-based Reputation Poll early this month.

Ghana-Hungary must strengthen collaboration in agriculture