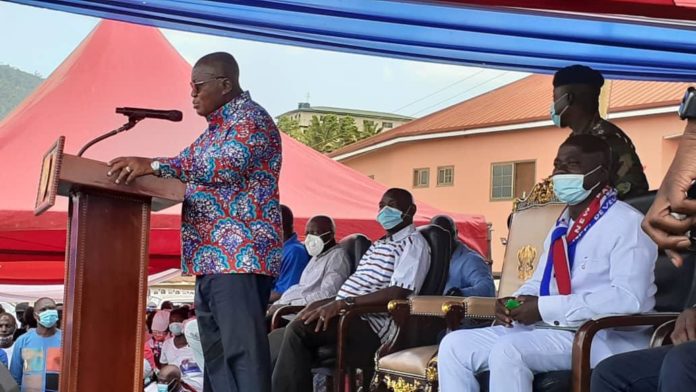 President Akufo-Addo, has appealed to the people of Kwahu to continue to support the NPP by voting massively for him and all NPP parliamentary candidates to continue with the vision of transforming Ghana.

The President said the people of Kwahu had over the years showed massive support to the NPP and whiles thanking them for the confidence reposed in him in 2016, called on them to renew his mandate once again.

President Akufo-Addo made the call at Nkawkaw, the first point of call as he began a two-day campaign tour of the Eastern region, on Sunday.

Mr Eric Kwakye-Darfuor, Eastern Regional Minister and Member of Parliament for Nkawkaw, said no other party could make Ghana better than the NPP, considering the manner in which the NPP had managed the economy through the many policy interventions introduced and appealed for massive votes on December 7.

He said “Ghana needs a mother to take care of her people and President Akufo-Addo has proved to be the right mother with the vision and character to do that”, and appealed to the people of Kwahu not to turn their back on the NPP.

Mr Samuel Ata-Akyea, Minister of Works and Housing and MP for Abuakwa South, said the NPP led by President Akufo-Addo had performed beyond expectation and Ghanaians must show appreciation by voting massively to retain the party in power.

He said the Eastern Region, was expected to show appreciation and support for the NPP by voting massively on December 7, to ensure that the good works started by the NPP was not derailed.

The President was accompanied on the tour by heavy weights of the Party including Mr Aoako-Atta, Minister of Roads and Highways, Mr Kwabena Agyepong, former General Secretary of the Party, Mr Brian Acheampong, a Minister of State, Mr Paa Kwasi Ansong, a Council of State member and a host of parliamentary candidates (PCs) in the Region.

The President as part of the tour would visit Atiwa East and West, Fanteakwa North and South, Aburi, Asuogyaman, Yilo and Manya Krobo Constituencies as well as New Juaben.