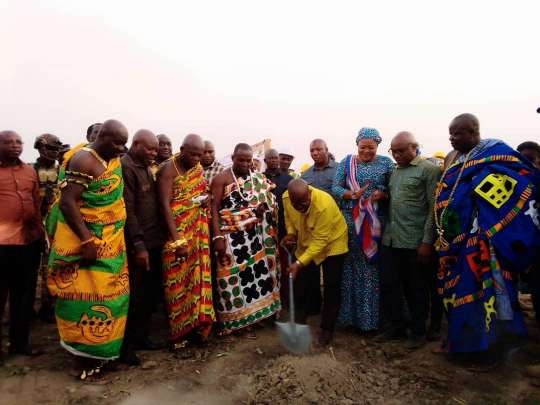 President Nana Addo Dankwa Akufo-Addo on Sunday cut the sod for commencement of work on a Regional Office for the Food and Agriculture Ministry at Nkwanta in the Oti Region.

The project, expected to be completed in eight months, comes with residential accommodation and offices and going to disability friendly.

President Akufo-Addo, addressing a durbar of Chiefs and people of Nkwanta at the sod cutting ceremony, to begin his three-day tour of the Oti and Volta regions said his government was committed to delivering all promises made to the people, as it did in the creation of the Oti region.

He said government decided to develop the new regions by evenly distributing development projects to all areas in these region, hence the siting of the Agriculture Department outside the regional capital.

President Akufo-Addo announced that they would soon be establishing a Tree Crop Development Authority to oversee the production of coffee, cashew, palm oil and rubber in the country.

The Authority would put measures in place to boost the yield of these crops and returns to farmers to improve living standards of farmers.

The President told the gathering that deplorable roads in the area would be fixed to promote socio-economic activities, especially agribusiness.

President Akufo-Addo urged the people to remain united and work together to speed up the progress of the new region.
Nana Obombo Sewura Lupuwura II, Paramount Chief of Akyode Traditional Council, said the Oti Region was already witnessing, “remarkable and progressive” development barely a year after its inauguration and commended Government for the foresight.

He mentioned the construction a warehouse to support agricultural activities, rehabilitation of a Magistrate Court and a market at Nkwanta among others, under the One million Dollar per Constituency initiative.

Nana Lupuwura said the President’s intervention in the construction of an emergency school block and girls dormitory at the Nkwanta Senior High School was relieving, following an increase in school enrolment under “his best policy”,- Free Senior High School (SHS) policy.

He added that they were grateful for efforts at fixing the Nkwanta-Dambai and Nkwanta-Shiare roads, and the supply of an ambulance to improve healthcare delivery.

The Paramount Chief said Nkwanta South was an agricultural area and appealed to the President to support farmers with tractors and to work on feeder roads such as Nkwanta-Kpasa to promote inter district economic activities.
He also appealed for Nkwanta town roads to be fixed and the provision of potable water to the people.

Mr. Alan Kyeremanteng, Minister for Trade and Industry, said government would construct a cassava processing factory in the area to help farmers increase their production.