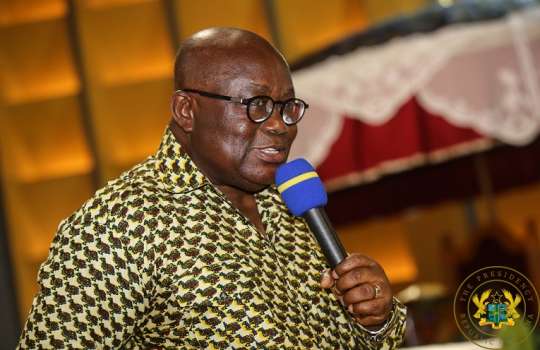 Before the reconstitution, the Brong-Ahafo Regional House of Chiefs had a membership of 50 and the inauguration was necessitated following a successful Referendum in December, 2018, which led to the creation of the Bono East and Ahafo regions in 2019, in fulfilment of the New Patriotic Party’s (NPP) Election 2016 campaign promise.

He is accompanied by Ministers of State, Members of Parliament and some officials of the NPP.

President Akufo-Addo said government was taking bold steps to incorporate and strengthen the role of chiefs in the governance processes of the country, adding that GhC3.5 million had been released to facilitate the completion of the National House of Chiefs Headquarters Building.

He said chieftaincy disputes and issues of land administration continued to be a national problem and, therefore, implored the House to support the Government to adjudicate the many outstanding disputes creating tension in the country.

President Akufo-Addo said government intended to build 16 office complexes and bungalows in each of the newly re-constituted houses of chiefs and called on the chiefs to support government to achieve its vision for the nation.

He admitted that though traditional authorities were not allowed to engage in active politics, as the embodiment of the people, they played enormous roles in national governance.

He, therefore, appealed to them to convince their subjects to vote and retain his government in power in Election 2020 to enable him to push the development of the nation to the next level.

President Akufo-Addo congratulated members of the House for their role in ensuring peace within their jurisdictions and called for their cooperation with government in its determination to bring local governance to the people and expand the boundaries of democracy.

He commended them for educating and encouraging their people on the need to adhere to the COVID-19 safety directives as well as all government restrictions against the spread of the disease.

Mr Kofi Dzamesi, the Minister of Chieftaincy and Religious Affairs, advised the chiefs to abide by the Chieftaincy Act 2008, Act 759, and discharge their duties to the best of their abilities to accelerate national development.

Mrs Rita Ama Adusah, a Circuit Court Judge, took the House through the three oaths of membership, allegiance and secrecy.