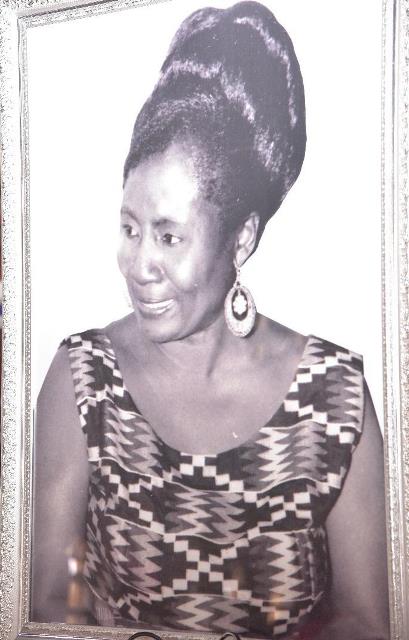 She was a founding member of the Gold Coast Women’s Association and performed a lot of charitable works in the women’s prisons in the Greater Accra Region.She died peacefully at her residence in Accra on November 14, 2019.

Other dignitaries present were; Mr Ishmael Ashitey, the Greater Accra Regional Minister, Alhaji Mohammed Nii Adjei-Sowah, the Accra Metropolitan Assembly Chief Executive, Mr Joseph Boahene Aidoo, the CEO of COCOBOD, Mr Hackman Owusu Agyemang, the Board Chairman of COCOBOD, and Sammy Awuku, the National Organiser of the NPP, as well as some traditional rulers, the Clergy and closed family members and sympathizers of the deceased.

President Akufo-Addo, in a tribute read on his behalf, described the late Mrs Obetsebi-Lamptey as a fearless woman who stood behind her husband through thick and thin during the country’s independence struggle and his incarceration by his political opponents.

He said she became a mother, not only for her biological children, but to all young boys and girls in her vicinity.
“She fought a good fight and deserves the Victor’s crown,” he added.

The President sent his condolences to the children and the entire Obetsebi-Lamptey Family and wished them well.
In a tribute by the children, they described their late mother as an adorable and kind-hearted who welcomed many other children to her home and cared for their needs.

Former President Kufuor, in a tribute, eulogized the former diplomat, describing her as a focused individual, diligent and humane person.

The former President noted that the late Mrs Obetsebi-Lamptey was a strong pillar behind her famous husband.
“In spite of the cruel and regrettable circumstances her husband died, she didn’t allow that to cloud her subsequent life, but rather resolutely carried herself with grace and purpose to uphold his great name and historic contribution to the national cause,” he said.

Right Reverend Samuel Kofi Osabutey, Bishop of Accra Diocese of the Methodist Church, in a sermon on the theme, ”Biblical Principles for a Fulfilled Life,” said death is the experience for the living and every action undertaken by man has its consequences.

He said those who obeyed the sages of wisdom would enjoy a prosperous and fulfilled life, saying that, it was imperative for everyone to trust in the Lord, rather than relying on one’s wisdom.

“As individuals, we should seek God’s wisdom and understanding in all our personal relationships. In every aspect of our lives, we should be disciplined and maintain a peacefully co-existence with our neighbours and agree to disagree,” Rt. Rev. Osabutey advised the gathering.

The late Mrs Augustina Akuorkor Obetsebi-Lamptey was born as the the younger of a set of twins to Mr William Charles Cofie and Madam Irene Odarchoe, both of blessed memory, in Accra on the 17th December, 1923.

She was baptised into the Methodist Church at an early age and remained committed Christian until her demise.
Her faith and love for the things of the Lord kept her through difficult and painful episodes in her life.

She left behind two children-Nah-Ayele and Nii Lante, several grandchildren and a whole ensemble of close family and friends.

She would be given a private burial at the Osu Cemetery, Accra.