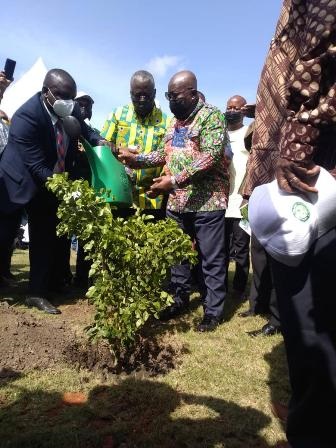 He planted a commemorative tree know as the Lignum Vitae or the tree of life, to signify the replenishment of the country’s vegetation, as he kicked started the government’s Green Ghana project.

The ambitious project seeks to have Ghanaians plant over 100 million trees by the end of the second term of President Akufo-Addo.

At a short ceremony at the forecourt of the Jubilee House, Accra, the President indicated that the forest was one of the nation’s most important resource, providing jobs, incomes, foreign exchange and environmental protection for the country.

However, the exploitation of forest resources for national development has not been sustainable over the years.

Noting that deforestation and forest degradation had been the greatest challenge to sustainable management of Ghana’s forest, President Akufo-Addo said the trend had to be reversed urgently in order to protect livelihoods, biodiversity, rainfall and water condition in the country.

“There is an urgent need to reverse the trend and return our forest resources, as much as possible, back to its original state.

“We do not have tomorrow, or the day after tomorow…We have to act now,” he emphasized.

The President said government was determined to restore the lost forest cover of the country, mostly through policy intervention.

He indicated that the attempt to regulate and sanitize the small-scale mining industry is one of such interventions to help keep the forest cover and reserves intact.

President Akufo-Addo stressed that the nationwide tree planting exercise would not be a one-off event, but would be observed annually until the country’s forest cover is replenished.

“We intend to enhance ongoing afforestation programs and see to the sustainable exploitation of our forest resources,” he said.

The President gave the assurance that the Government would ensure the survival of the five million trees being planted.

“Together, we must and will protect our environment and ecosystem and we must contribute to the world’s agenda at combating global warming.

“We have to protect planet Earth and our motherland Ghana. I appeal to all Ghanaians to embrace the green Ghana initiative,” he urged.

He said the Forestry Commission had marked out sites for tree planting including; backyards, open spaces, school compounds, residence and 100 metres away from roads.

The action, he said, would help “Green Ghana” and preserve the ecosystem to aid the fight against the negative effects of climate change.

Mr Jinapor announced that a Monitoring and Evaluation team had been constituted and would report quarterly and annually on how the trees were faring and gave the assurance that the public would be informed in due course.

“So the Green Ghana Project is national in character and aimed at awakening national consciousness and should be a collective efforts by all,” the Minister emphasised.

The minister lauded the enthusiasm shown so far by the Ministry of Education and Ghana Education Service under ‘One-Student, One-Tree’ initiative to plant five million trees on the day.

He also commended faith-based organizations including; the Church of Pentecost, Presbyterian Church of Ghana, the Apostolic Church, the Catholic Church and other corporate entities showing the zeal to lead their members to plant trees.

He said the five million trees targeted this year would be scaled up to 20 million next year and was hopeful that by the end of President Akufo-Addo’s term, 100 million trees would have planted.

He said the Green Ghana Agenda did not mean the cessation of the ongoing Afforestation Scheme, but would be enhanced to restore the lost vegetation.

On nurturing the trees to maturity, Mr Jinapor indicated that Forestry Commission would provide guidelines for planting the seedlings and take care of the young trees in the forest reserves, while the brigade corps under the Youth in Afforestation would cater for the trees in the urban areas.

“This is a single most ambitious programme. This is a Ghana Project and so let us all join and make a big statement on the day and ensure the survival and sustenance of our forest and environment.
introduced by government and being driven by the energetic youthful.