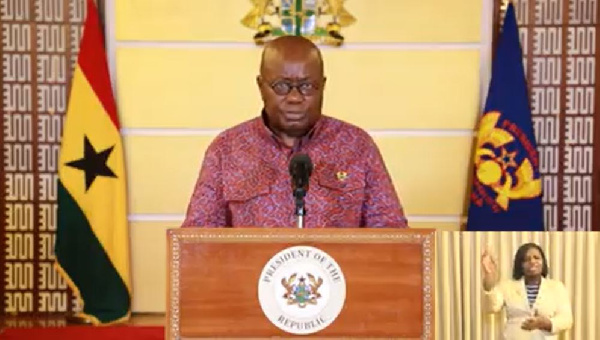 President Nana Addo Dankwa Akufo-Addo, has asked Ghanaians to continue to rally behind him to defeat the Coronavirus pandemic.

“This is the time for sacrifice, so that we do not have to bear a greater cost in the future, ”the President said in his 8th COVID-19 update on measures taken against the spread of the Coronavirus on Sunday night.

Announcing a two-week extension of the social distancing and gathering protocol, the President said he was unhappy that some Ghanaians were aiding some West African nationals to enter into the country illegally, despite the closure of it borders.

“Even more disturbing is the fact that several of the West Africans, who have been arrested, have later tested positive for the virus, ”President Akufo-Addo said.

He described such act as unpatriotic, which must be stopped. “We cannot continue to allow a few persons, who are motivated by their own selfish, money-making interests, to endanger the lives of the rest of the population.

“Not only will persons who enter our country illegally be strictly dealt with, but so will Ghanaians who facilitate their entry. As I have said before, being a Ghanaian must mean that we look out for each other”, he cautioned.

The President stated that it was important for all Ghanaians to rather see the virus as the enemy, and not one another, and therefore, the need for all to be resolute in “our unity to defeat this invisible enemy”.

He said since no country had been spared the ravages of the virus, he was determined to pursue his single-minded goal of steering the country out of the crisis, protect the people from the virus, and see to the rebuilding of the economy.

He, therefore, encouraged the people to begin to lift their heads above the parapet, and look at the future with courage and hope.

He also hinted that he shall shortly, be outlining, the path for bringing the restrictive measures, systematically, to an end, “And defining the basket of measures for the revival and growth of our national economy”.

He, however, admitted that the battle against the virus was daunting as the nation was still very much in unchartered territory, and, clearly “we still have some way to go towards ridding ourselves of the virus”.

“The truth is that this will be a long war, broken up into several battles, ”he stated.

That notwithstanding, the President was happy that Ghana had registered a modest success in the important battle to trace and test many of the persons who had come into contact with infected persons.

He said the country would pursue vigorously, its strategy of enhanced “3Ts”, which is, ‘tracing and testing’ to allow us identify infected persons, and ‘isolating and treating’ them, adding that it was the surest way to root out the virus.