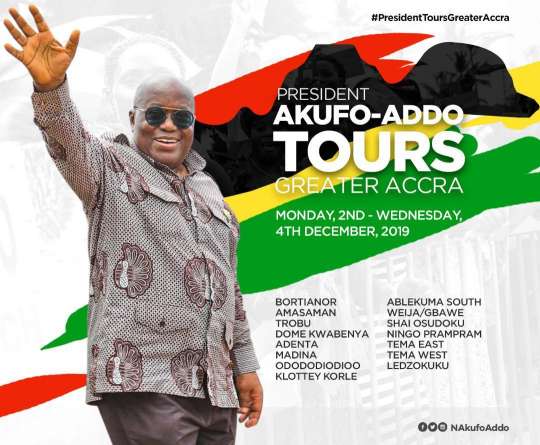 President Nana Addo Dankwa Akufo-Addo on Monday begun a tour of the Greater Accra Region to familiarize himself with the developments in its various Metropolises, Municipalities and districts.

He began his three-day tour with a durbar of Chiefs and People of Ga South and Weija Gbawe in the Bortianor /Ngleshie /Amanfrom Constituency, where the local traditional authorities appealed to him to intervene and resolve the boundary dispute between the Greater Accra and Central regions.

Nii Kwarshie Gborlor IV, Ngleshie Amanfrom Mantse, told the President that the boundary dispute had become a major challenge to land administration and title registration in the Amanfrom catchment area.

He said in the past, the Chiefs ad people knew the boundary between Accra and the Central region but now no one seems to agree on one, a “situation which had become a headache for the Chiefs” in the area.

The Amanfrom Mantse appealed to the President to ensure that the boundary that existed between the Greater Accra and Central regions in the past was respected for peace to prevail.

“I am confident that you and your assigns will help bring a closure to this all important matter, ” he said.

Nii Gborlor described the President’s visit to the area as “a show of love to the Ga State”, commending the government for the development taking place across the nation.

He also lauded the government for taking the bold step to clean up the banking sector, saying the move had ensured a sound financial sector in the country.

“In the past, inflation was on the rise, but because of the good policies implemented by the President, he has been able to arrest the situation, ” he stated.

He also appealed to the President to address the deplorable state of the roads in the area.

On his part, President Akufo Addo indicated that he had taken notice of the request by the Chiefs and people of the area to bring resolution to the boundary dispute between the two regions.

He assured them that he would initiate the process to have the matter resolved, saying, “My administration will take a serious look at it and resolve the issue. It is an issues that has prevailed for a long time and it needs to be resolved.”