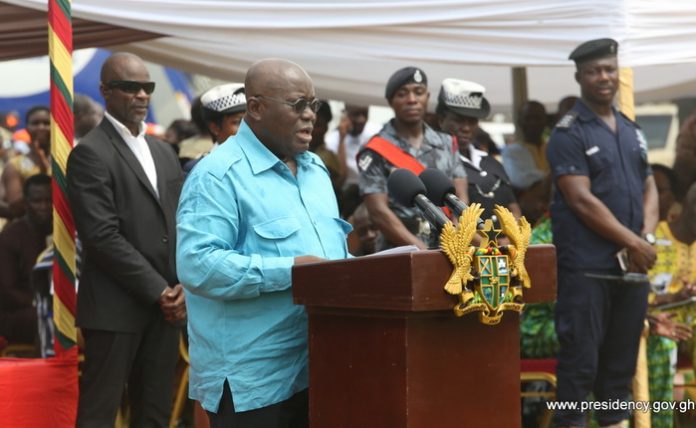 President Nana Addo Dankwa Akufo-Addo at the weekend sworn into office 10 regional ministers approved by Parliament, with an admonition to them to work with a mindset of service and humility. “Humility and the readiness to serve are the most important ingredients that will guarantee your success,” he told the ministers after they took the oaths of ministers, secrecy and allegiance.

President Akufo-Addo asked them to forge good relations with the Metropolitan, Municipal and District Chief Executives, civil servants and traditional leaders in their various regions.

He reminded the ministers of their role as his representatives in their various regions.

He urged them to work hard to raise the standard of living of the people and to take serious the onerous responsibility for the effective running of the administrative machinery in their regions.

“The net effect of these constitutional provisions is that, you are the face and body, the eyes and ears of the president in your regions. You have to project my vision, my values, my policy and my spirit in your regions. These are all embodied in the manifesto of the New Patriotic Party.”

President Akufo-Addo urged the ministers to comply with the obligation of filing their personal assets as required by law and to protect the public purse at all times.

“We have given a pledge to our people that we will be honest in our dealings with the public purse entrusted to our care, and we will have to live up to it.”

The President expressed gratitude to the Speaker and members of Parliament for expeditiously approving his nominees to enable his government kick-start the implementation of polices to put the country on the right path.