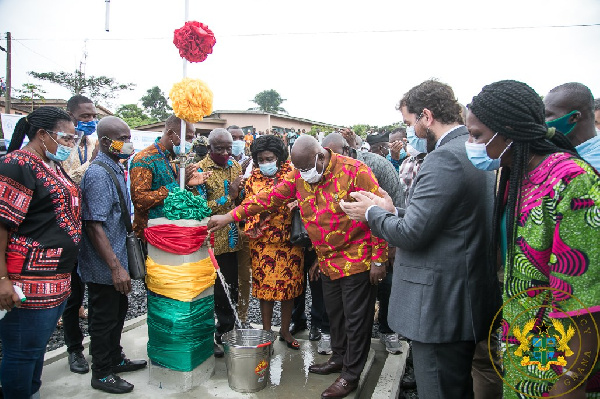 The system, the Five Piped Water Supply Systems under the Water Supply Improvement Project (WSIP) of the Ghana-Spain Debt Swap Development Programme (DSDP), was being implemented in Ho Municipality and in three Districts of the Region namely, Ho West, Agortime Ziope, and Adaklu-Anyigbe.

Commissioning the Project at Amedzofe, in the Ho West District on Tuesday, President Akufo-Addo reiterated Government’s commitment to fulfill the 2016 NPP Manifesto pledge of providing “Water For All”.

He said DSDP was one of the interventions instituted by Government to ensure the continuous provision of potable water to the rural and peri-urban populations of the country.

The President noted that the water supply project had expanded access to water, and had ensured sustainable water supply and sanitation services in 36 rural communities.

He said the project, which had seen the construction of 18 piped water supply systems, was expected to serve a total population of 69,000 people in all the districts, adding that 13 other water systems under the Project, which were at various stages of completion, were expected to be finished in December 2020.

President Akufo-Addo commended the chiefs and people for preserving the spring where the Amedzofe Water System sourced water, and urged other communities to emulate that feat “and protect our water bodies, so as to ensure the availability of water.

The President disclosed that government had secured funding for the Rural Communities and Small Towns Water Supply Project, otherwise known as the Aqua Africa Water Project.

That Project, expected to benefit some 282,000 people, he said, would see the construction of 150 water point sources and 12 small town water systems to serve 588 communities across the Volta, Oti, Greater Accra, Ashanti and Eastern Regions.
GNA