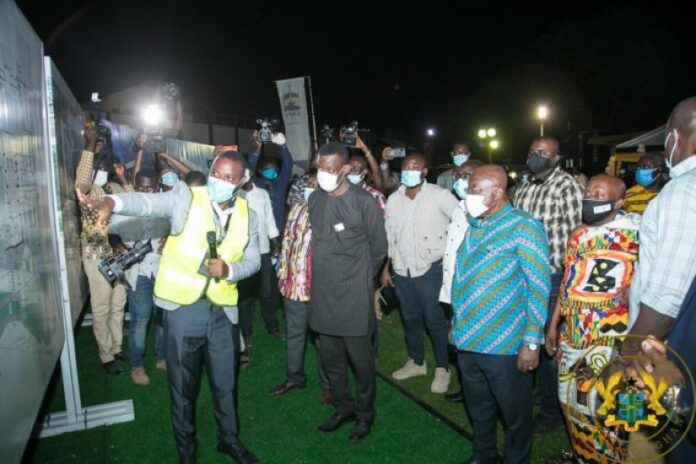 Though the building of the office is in fulfilment of President Akufo-Addo’s 2016 campaign promise to the people of Takoradi to relocate the GNPC Operational Headquarters to the Western Region, it is also imperative for the move, since GNPC generates its income from the offshore Western Region in the on-going upstream oil and gas activities.

President Akufo-Addo who cut the sod on the second day of his two days visit to the Western Region, indicated that it was a fair game to establish the GNPC office in the Region because its source of income generation was drawn from the Region.

The seven-storey office complex, which would comprise of a 300-seater auditorium, gymnasium, cafeteria, Business centres, offices among others, would be completed within two years.

“In compliance with Government’s policy of ensuring smart energy efficiency, the office complex is designed with solar ingress and wind direction.

Mr Freddy Blay, Board Chairman of GNPC, explained that the decision to relocate GNPC’s Operational Head Office to Takoradi was as a result of a manifesto pledge made by the President in 2016 and his vision to restore and enhance GNPC’s presence in the Western Region.

“As a result, the GNPC Board took a decision to set up the GNPC Foundation and office in Takoradi, to spearhead Corporate Social Investment initiatives which was a deliberate strategy to ensure that even though the Foundation has a national scope, the socio-economic, educational and training needs of the people of the Western Region received special focus”, he indicated.

The Board Chairman further explained that the project experienced delays because of the COVID-19 pandemic and the one and half years it took to secure the land.

He however, thanked the Western Regional Minister, Mr Kwabena Okyere Darko and the Lands Commission for their tremendous assistance in securing the land for the project and assured the President that, once the project was completed, the GNPC staff would move in and begin work.

President Akufo-Addo earlier, inspected and also cut the sod for the construction of some key gas enclave roads being constructed by the Department of Feeder Roads and the Ministry of Roads and Highways all funded by GNPC.

GNPC is the state agency responsible for the exploration, licensing and distribution of Petroluem related activities in Ghana.

Meanwhile GNPC Foundation is the Corporate Social Investment Arm of the GNPC, dedicated to impacting on the lives of people and communities within the production enclave of the corporation in the Western Region, voltarian basin and in Ghana at large, through community and social intervention programmes.

The Foundation operations are driven by three thematic areas of focus, environment and social amenities, education and training and economics empowerment.