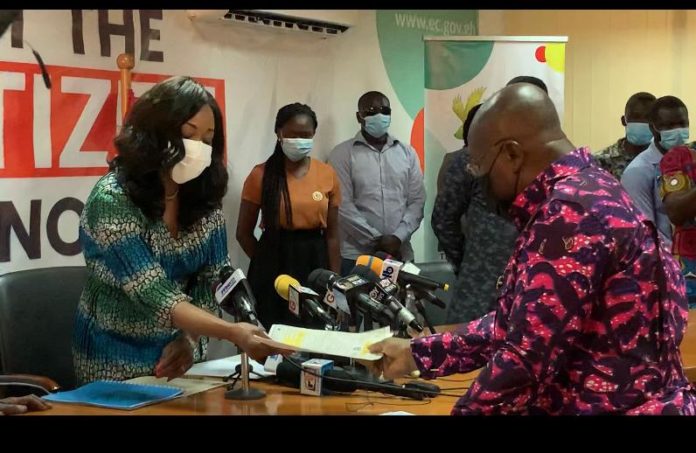 He was acclaimed the NPP’s flagbearer to seek another four-year mandate to lead the country after he emerged the only personality to file for the slot when the party opened and closed nominations earlier in the year.

President Akufo-Addo, 76, an astute lawyer and politician, will battle his main opponent and predecessor, John Mahama of the National Democratic Congress, for a third consecutive time.

The December 7 elections would be his fourth consecutive Presidential electoral contest, having taken part in that exercise in 2008, 2012 and in 2016.

Accompanied by Vice President Dr Mahamudu Bawumia, the Chief of Staff at the Presidency, Madam Frema Osei Opare, the NPP’s Chairman Mr Freddie Blay, General Secretary John Boadu and Campaign Manager Peter Mac-Manu the President handed his nomination form, a filing fee of GHc100, 000 and other relevant requirements to the Returning Officer of the December 7 Presidential Polls, the EC’s Chairperson Mrs Jean Mensa at the Commission’s Headquarters in Accra.

He thanked the Commission for the expeditious process that he had been taken through, and said the NPP’s democratic values was non-negotiable.

“We are counting on you to be the arbiter that holds the scales evenly to all contestants. What the Ghanaian people are expecting is that the election in December 7 will be an election conducted in peace, freedom and security and in transparency so that the results of the elections will reflect the will of the people.

President Akufo-Addo was happy that the work so far done by the Commission had given him and majority of Ghanaians “considerable confidence that the new leadership of the EC was competent and committed to free, fair, credible and transparent elections.”

“I am not interested in any crooked results and I do not want to be a President elected by deceit. I look forward to a contest that would be fairly conducted so that if indeed by the grace of God Almighty that I am again the choice of the Ghanaian people, it will be one that would be freely and openly demonstrated,” he stated.