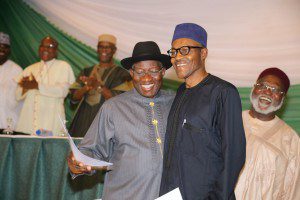 The Federal Government on Wednesday said President Goodluck Jonathan will formally hand over power to the President-elect, Gen. Muhammadu Buhari (retd.) on May 29.

Briefing State House correspondent at the end of the weekly Federal Executive Council meeting presided over by President Jonathan, the Minister of Information, Senator Patricia Akwashiki said, ?In the council today, the discussion was still centered on transition.

?I have to make a little clarification because some people thought I said May 28 will be handover date. I never said that. I said May 28 will be the last day that we will have our handing over briefs by ministries and parastatals. I said from the 28th of this month to that date has been given to departments and ministries to submit their hand over notes.

?We have started the transition and it is ongoing. We are submitting our handover notes to the Office of the SGF.

Speaking on the sacking of Mr. Suleiman Abba as the Inspector-General of Police, Akwashiki said, ?I think it is within the President?s power to appoint and sack and he did what he had to do,?