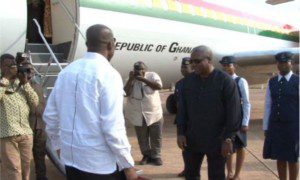 He was accompanied by Madam Hannah Tetteh, Minister of Foreign Affairs and Regional Integration and Professor Naana Jane Opoku-Agyeman, Minister of Education, among other dignitaries. President Mahama has already met with President Khama Ian Khama of Botswana.
He has also visited the Dee-Zone productions company, funded by the State, akin to the Youth Enterprise Initiative that he inaugurated some few months back.
President Mahama would also support President Khama to officially inaugurate the Dikagatlhong Dam project in Francistown, in the northern parts of the southern African country.
President Mahama is also slated to meet the Ghanaian community, visit the Diamond Trading Company in Botswana and tour the Eurostar Diamond Polishing Company, before returning to Ghana on Wednesday.
.
GNA