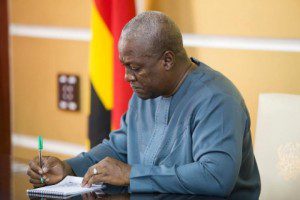 StarrFMonline.com has gathered from sources within the Flagstaff House that President John Mahama will soon effect his last ministerial reshuffle before the 2016 elections. The movements will follow recent changes at the presidency, which resulted in local government and rural development minister Julius Debrah taking over from Prosper Bani as Chief of Staff.

Prior to Bani?s movement from the Presidency, the President?s Executive Secretary Dr Raymond Atuguba and his Director of Communications, Ben Dotsei Malor, exited voluntarily after their contracts ended.

While Mr Malor has returned to the United Nations, Dr Atuguba is returning to academia.

Reliable sources within the Flagstaff House say among the Ministries that are likely to be affected by the looming reshuffle are Youth and Sports, as well as Environment, Science, Technology and Innovation.

Mr Ayariga recently launched a scathing attack on Ghanaian Journalists saying they were asking ?useless questions? regarding the budget used by the Government of Ghana and the Sports Ministry in taking part in the 2015 Africa Cup of Nations in Equatorial Guinea.

?You are using valuable time to discuss useless matters, please, I think that this is very very regrettable and it will dampen the spirit of the boys who were trying to kill themselves only to come back and even the food that they ate, they will hear on radio that their minister is [answering questions] about the food that they ate. It?s sad it?s sad it?s sad,? he howled.

He said: ?If I decide to grant you an interview as a minister, I expect you to ask me useful questions?you want to take over the job of the Auditor? Are you the Auditor??

Earlier, Mr Ayariga had told Parliament that Ghana spent close to $6million on the tournament.

The former Information Minister made this known on the floor of Parliament after he was authorised by the Speaker Edward Doe Adjaho to present a statement on the participation of the senior national football team in the tournament.

Ayariga explained that part of the amount went into the team?s camping in Spain as well as bonus payments.

The Sports Minister told the House that the government spent $932,740 and 3,243,580 Ghana cedis on the pre-tournament camping for the Black Stars.

For the three-week tournament 608,640 dollars was used for boarding, lodging and others for players and officials.

Ayariga also explained that 3.224, 139.20 dollars was spent on bonuses and honoraria for players, technical team and officials of the national team.

After presenting the breakdown to Parliament, numerous radio stations called the Minister on phone to seek clarifications on the figures, but Mr Ayariga met such calls with abrasion and aggression.