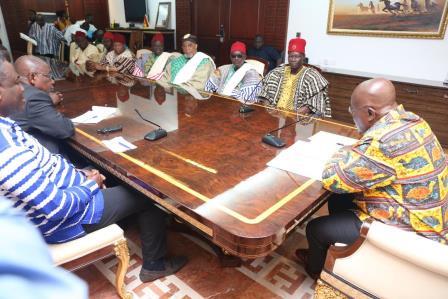 President Nana Addo Dankwa Akufo-Addo has assured Ghanaians that his government would ensure a fair and equitable distribution of state resources across all regions of the country.

The unbiased and efficient distribution of the nation’s wealth, he noted, was what would create wealth, eradicate poverty and improve the living standards of Ghanaians.

President Akufo-Addo gave the assurance when the members of the Upper East Regional House of Chiefs called on him at the Flagstaff House in Accra.

He told them that the Constitution was explicit on the sharing of the country’s resources, saying that his government would not discriminate against any region of the country in that regard.

Noting the negative economic situation that he inherited from the past administration, the President said government had in the past ten months taken prudent steps that were improving the economic fortunes of the country, and that with time, every part of Ghana would feel the positive change.

He assured the Chiefs that government would ensure fortunes of the Upper East Region was improved and that the issues besetting the area was holistically and promptly addressed.

The Chiefs on their part appealed to the President to complete the Bolgatanga Regional Hospital and also suggested that government acquired lands in the region to develop irrigation systems to support all year round farming in the area.

The group also called on government to fix the road network in the region to accelerate the economic development of that Savannah belt.
GNA/Newsghana.com.gh