President Nana Addo Dankwa Akufo-Addo on Monday assured organised labour that his administration’s policies and programmes would set the country onto the path of progress and prosperity. 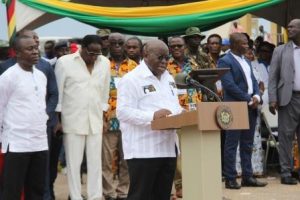 He said the overwhelming vote of confidence given to him and the New Patriotic Party (NPP) in the last election was an indication that his government would revive, grow the economy and generate jobs in the country.

President Akufo-Addo gave the assurance in his maiden May Day address at the 17th National May Day Parade at the Independence Square in Accra.

The Day was observed under the theme: “Ghana@60; Mobilising for Ghana’s Future through the Creation of Decent Jobs.”

President Akufo-Addo said upon assuming office, the first priority of his government was to get the economy out of the doldrums and create the atmosphere for entrepreneurs to bring on the jobs.

“We, in government, have set about our part of the task with zeal. Our first budget, the Asempa Budget, has set out clearly the roadmap to bringing prosperity to Ghana. We have taken important steps to create an enabling environment for the private sector to flourish.

“We have reduced taxes, including taxes on kayayei; inflation is on the decline; interest rates are on the decline; and relative stability of the exchange rate has been restored. The budget also reduced the fiscal deficit from 9 percent in 2016 to a projected 6.5 percent in 2017, bringing Ghana back to the path of fiscal discipline. Macroeconomic stability, which is key to economic growth and job creation, is, therefore, being restored,” he said.

President Akufo-Addo said government was also instituting policies to remove the impediments to the ease of establishing and doing business in the country.

“We must get more people in jobs and expand the formal sector of the economy. We are also upholding our social commitments. As from the next academic year, beginning in September, our Free SHS policy will kick into action. We are also making a determined effort to ensure the financial sustainability of the National Health Insurance Scheme,” he added.

President Akufo-Addo also outlined the innovative and urgent steps taken by his government to address the severity of joblessness in the country.

“That is why, in government, we have taken the step of rolling-out promptly the programme for Planting for Food and Jobs, which I recently launched in Goaso, in the Brong Ahafo region. We are committed to ensuring that the target of 750,000 direct and indirect jobs earmarked under this intervention will come to fruition,” he said.

President Akufo-Addo noted that in addition to the programme for Planting for Food and Jobs, the one-district-one-factory, one-village-one-dam, the Zongo Development Fund, and the equivalent of one million dollars per year per constituency policies are all being pursued to stimulate job creation opportunities across the country.

He stated that through the Ministry of Employment and Labour Relations, government was also in the process of reviewing existing Youth Employment Agency (YEA) modules with the view to introducing new employment modules, and expanding existing ones to create over 200,000 jobs for the youth.

The President commended the role played by organised labour in making “today’s ordinary things possible”, recalling the Haymarket Affair that gave the name May Day.

“Some people lost their lives so we could have the eight-hour working day and it took years of struggle before we could have Saturday as part of the weekend. The role of organised labour in our nation’s struggle for freedom and independence was written in letters of gold. Indeed, Kwame Nkrumah’s historic call for Positive Action in 1950 would not have succeeded without the active support of the trades’ union movement,” he said.