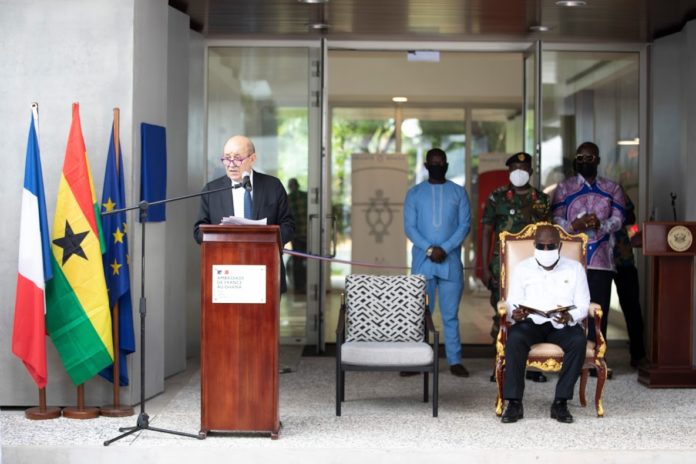 At a short ceremony, President Akufo-Addo noted the mutual ties that Ghana and France had cultivated over the past 60 years, saying that the opening of the facility would further strengthen the bonds of friendship between both nations.

He said Ghana was appreciative of the hand of cooperation extended it by France in various sectors, including the health, education, sanitation, agriculture, transport, water and local governance, and recently when the coronavirus pandemic hit the country.

The President assured France that Ghana stood ready to “renew and deepen” her relationship with Mediterranean nation, optimistic that the two nations would continually find common grounds for collaboration.

“I have no doubt that together, our two countries can forge an even stronger partnership for the mutual benefit of our people.”

“Ghana stands ready to renew and deepen her relationship with France for the prosperity and progress of our two people and the opening of the chancery in Accra should be a sprint in our step in this direction,” he said.

Mr Le Drian said the new chancery represented “a very strong symbol, one as strong as the ties of friendship, cooperation, partnership and trust that our two countries have forged together and which continue to expand in all areas.”

He said his country was determined to make renewal of the Franco-Ghanaian
partnership a lasting one, and new chancery “stands here as a testament to this new commitment and partnership.”

The French foreign minister praised Ghana’s longstanding commitment to democratic achievements, saying his country viewed Ghana as the model of the African renaissance needed in the 21st century.

He said Ghana was considered an incubator for the invention and implementation of the
new partnership which France and Europe sought to build with your Africa, adding that his country would forge partnership that would build the common future of both nations.