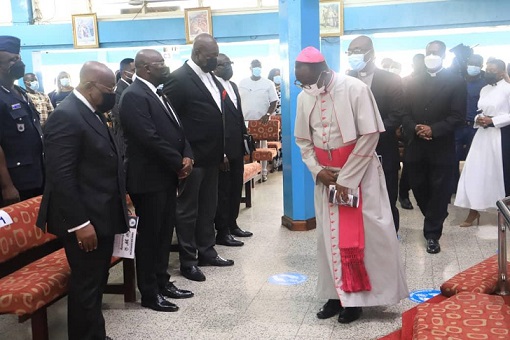 President Nana Addo Dankwa Akufo-Addo has joined the Ghana Bar Association (GBA) and the Judiciary at a remembrance service to mark the 39th anniversary of the murder of the three high court judges in 1982.

There were also members of the Appeals Court, High Court, past and current executives of the GBA, and families of the deceased justices.

Mr Forson, President of the GBA, who gave a recollection of the events before and after the deaths of the judges, said the trio stood for the rule of law and performed their duties without fear, favour or ill-will.

He said the fearless manner the three judges dispensed justice during those times had continued, and would continue to inspire members of the judiciary.

The GBA President called into question the vexed issue of corruption in the Police Service, and urged government to resource the Service adequately to boost its ability to perform its traditional role of maintaining law and order effectively.

“Unfortunately the reality today is one of a veneer or appearance of such equipment and maintenance but stories of corruption of police officers, especially those at the district offices and those on our roads, leave a lot to be desired.”

Mr Forson Jnr was emphatic that there ought to be a serious look at the qualification of the personnel who were recruited into the Police Service to improve the quality of service rendered in return for the taxes of the people.

“The general ambience in our police stations is worrying. There may be some very fine, knowledgeable and respected senior officers in the Service but for some reason this refinement does not percolate down to those who interface with the citizenry on a daily basis,” he said.