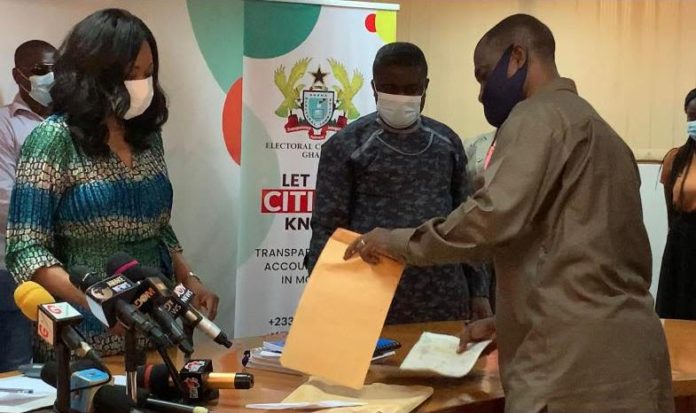 Mrs Mensa who received the forms separately said the process was one of the most important activities towards the December 7 Elections and that it was in consonant with regulation seven of the CI 127 that enjoined a Presidential Candidate to complete and sign four copies of the Nomination Forms among other things.

She said as part of the Commission’s efforts to ensure a transparent, credible and fair process, it had developed a detailed checklist that embodied the criteria to be satisfied by the Presidential Candidates as prescribed by law.

“The template will guide the scoring and awarding of marks by teams established by the Commission to scrutinise and review each of the Nomination forms submitted,” she said.

Mrs Mensa explained that the IT Team had been charged with the responsibility of scrutinising all the Voter IDs of the Presidential Candidates and their supporters to verify their authenticity.

She expressed the confidence that the five-day period provided for the filing process as opposed to the two days provided in previous nomination process would allow enough time for Presidential Candidates to correct any error identified on their forms.

President Akufo-Addo thanked the Commission for the expeditious process that he had been taken through, and said the NPP’s democratic values was non-negotiable.

“We are counting on you to be the arbiter that holds the scales evenly to all contestants. What the Ghanaian people are expecting is that the election on December 7 will be an election conducted in peace, freedom, and security and in transparency so that the results of the elections will reflect the will of the people.

The Presidential Aspirants of GUM, Rev Andrew, commended the leadership of the Commission for a successful registration and exhibition exercise and urged them to remain resolute and ensure a fair play for all.

“I know your capabilities so I will want you to continue to prove yourself. I know God will surely be by your side,” he said.