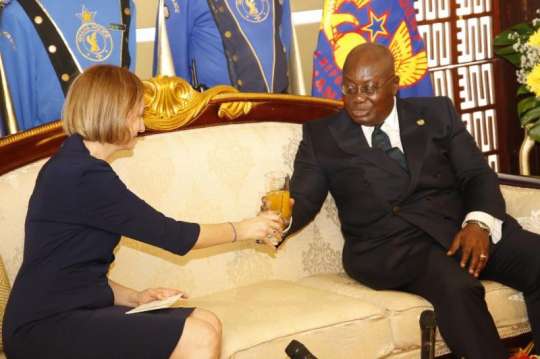 Four new Ambassadors to Ghana on Wednesday presented their letters of credence to President Nana Addo Dankwa Akufo-Addo at the Jubilee House in Accra.

They are Stephanie S. Sullivan of the United States (US), Emad Mugsy Hanna Kamel, the Arab Republic of Egypt, Özlem Gülsün Ergün Ulueren of Turkey and Pham Anh Tuan, Vietnam.

President Akufo-Addo said Ghana was committed to working with them to deepen the ties with their various nations for the mutual benefit of everybody.

He underlined the resolve of his government to put the country on a new path of growth, leveraging on its resources to accelerate development and create wealth for the people.

Ghana’s relations with other countries, is gradually shifting from aid dependency and handouts to trade and partnerships, to enhance its dignity and self-worth.

They are eager to change the narrative of being dependent on the generosity of other nations, and he invited stronger cooperation of the other countries.

“It is not right that since independence, we are still dependent in many areas of our national lives on the generosity of others. We should by now, be able to stand on our own feet.”

President Akufo-Addo expressed discomfort with the low volumes of trade among African nations and called for radical change.

Countries in Africa needed to work together to explore trade and investment opportunities through the Continental Free Trade Area Agreement (CFTA) for the future prosperity and development of the continent.

“We are the only continent in the world where trade amongst our nations is so negligible.

“I believe it is part of the reasons for the general poverty on the continent” he added.

He spoke of his determination to work to enhance cooperation between Ghana and Egypt, as well as all other African nations to ensure that they enrolled fully on the CFTA

He wished the Ambassadors a successful duty tour and assured them of his government’s support to carry out their duties.

Ambassador Sullivan pledged to work to strengthen US-Ghana relations – advance mutual partnerships and trade between them.

No effort would be spared to strengthen the already strong relations with Ghana.

The Vietnamese Ambassador promised to seek new areas of cooperation and enhance relations between Ghana and his country.